Religion is very much integrated in Balinese society. In no other country in the world than in Indonesia so many religions live side by side.

All the world’s major religions are represented – some more than others: Christians, Hindus, Buddhists and Muslims celebrate and pray daily in churches, temples and mosques.

Space for prayer and meditation can be found anywhere in Bali. Prayers and rituals are practiced early in the morning. There is no need for an alarm clock for those who live next to a temple or a mosque. Although such a parade can be annoying to late risers, it can be a powerful new day call to others. Sometimes you can hear beautiful melodies, which can make it easier to get up in the morning.

At 5 o’clock singing Koran prayers can be heard which take turns with Buddhist and Hindu praising hymns coming from the temple’s speakers. Bali’s population does not sleep much. First, there is prayer and preparation for the offerings. During the day it is indeed peaceful, but the praising of the gods will be repeated at certain times, that’s why continuous prayer often determines people’s daily lives.

For special religious followers as Hindus – the largest religion on Bali – almost every day is a holy day. On our sunrise walk we meet women in traditional garb, balancing fruit and offerings for sacrificial ceremonies on their heads to the temples. The aroma of incense sticks sweetens the air.

The offerings are hard to miss. They are often placed in the most unusual and most inopportune places: in front of doorways, in front of shops, in the street and even in heavy traffic. Despite this, do not step on them or drive over them with your scooter. People find a way to avert them because they are holy. 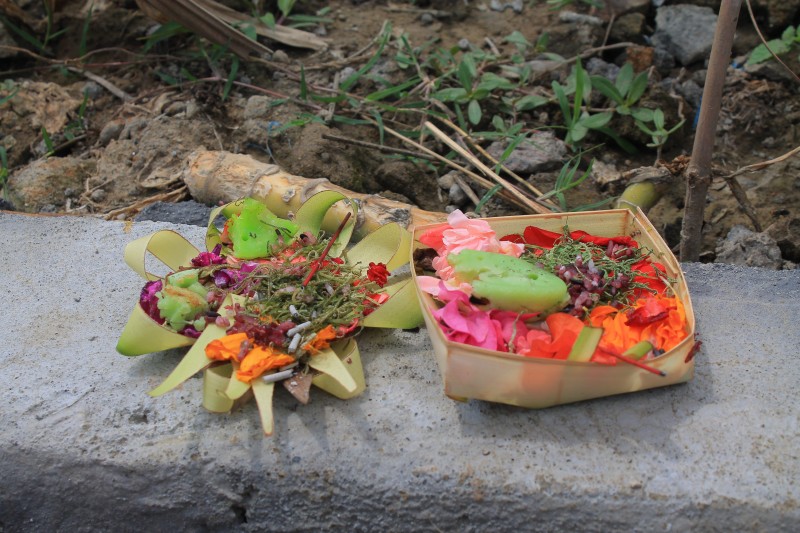 Therefore, my advice to all those who visit Bali for the first time is: keep your eyes peeled when walking or driving! Stepping on an offering is considered an insult to the gods.

In the baskets braided out of palm leaves you will find flowers, fruits, cookies, candies, coins and incense. They are offered to the gods in the temples as a sign of faith and solidarity. After a prayer and other rituals, the sacrifices are considered blessed and can be taken home, to be shared with the family. During the sacrifice, the essence – or Sari – has been taken from the offerings by the gods. A portion will be returned and may be consumed by humans. 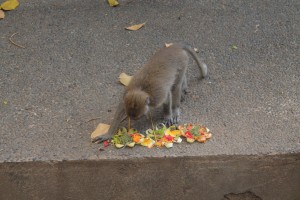 The sweet treats also attract the monkeys of Monkey Forest in Ubud. Since monkeys are deities in Hinduism, it is not of a big fuss if a monkey steals a cookie from the offering. Always good for some entertainment.

Hindus are the world’s leader in celebrating. For every stage in life – from birth to death, there is a ceremony to pay tribute to a person’s development. Most ceremonies revolve around the theme pregnancy and childbirth. A newborn must go through eight ceremonies until it is ready to be integrated into the Hindu community.

The temple at these ceremonies is the place to receive and to encounter – to encounter the gods and the people from the family, friends, or the temple community.

In Hindu belief, there are various temples for different purposes and ceremonies. Bali, the island with thousands of temples, has temples in every district, every village and every household. Often even a single house has its own temple.

Typically, a temple is shared with several close members, such as a small village or a family. Daily prayers and recurring ceremonies are held there.

The 8 most important Hindu ritual cycles for a baby

In the eighth month of pregnancy, the expecting parents decent into a river. A ritual in which small fish are placed on the mother’s abdomen with their heads facing downward, assuring an easy birth. They should show the baby the way out of the mother’s womb.

The placenta is burned after birth. What happens afterwards, depends on the baby’s gender. For a boy: the placenta is burned on the right side of the pavilion facing North. The seat of the Hindu deities is in the North. For a girl: the burning is done on the left side.

Further objects are added to the fire; such as a pencil, a brush, a book or a fan. Objects represent talents that you want to pass to the children on their way to adulthood.

For parents, it is not allowed to enter the kitchen for three days.

3. Ceremony on the 3rd day after the birth

In a purification ritual, parents are given permission to enter the kitchen again.

12 days after the birth, the umbilical cord falls off. It is then preserved in a shrine in honor of Kumara, the guardian of all newborns.

5. Ceremony on the 42nd day after the birth

This ceremony is the most festive and most essential for the newborn and its parents. We were allowed to be there. Friends of our couchsurfing host organized a Hindu baby ceremony and we were invited.

The ceremony serves as a protection. The baby has developed well so far and you want to protect and encourage this development. In the center of the forehead lies the third eye – the human soul. Rice grains are placed here. The baby has to be brave for what follows. A chick and a young duck are placed together under a special chicken fight cage. The baby is then laid down in the middle. The two birds will peck the rice grains from the baby’s forehead. The baby must grab objects around itself. These objects have been blessed in advance and if the baby reaches for them, they will determine the child’s future. 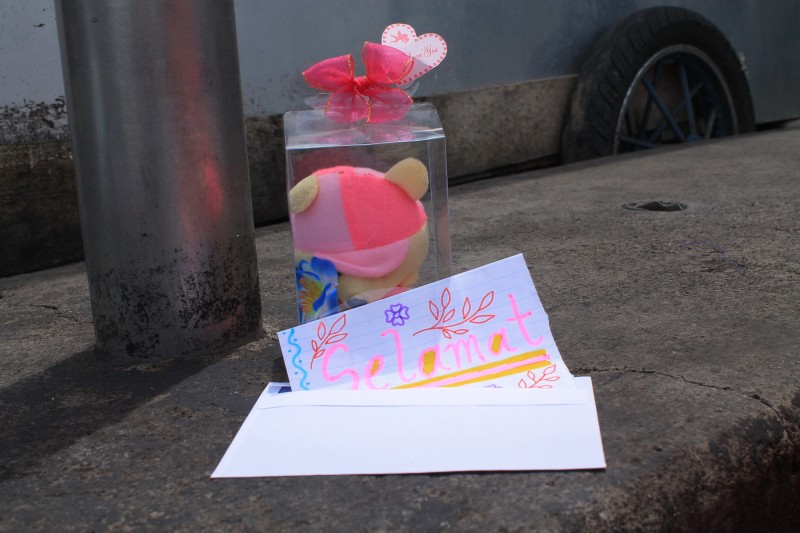 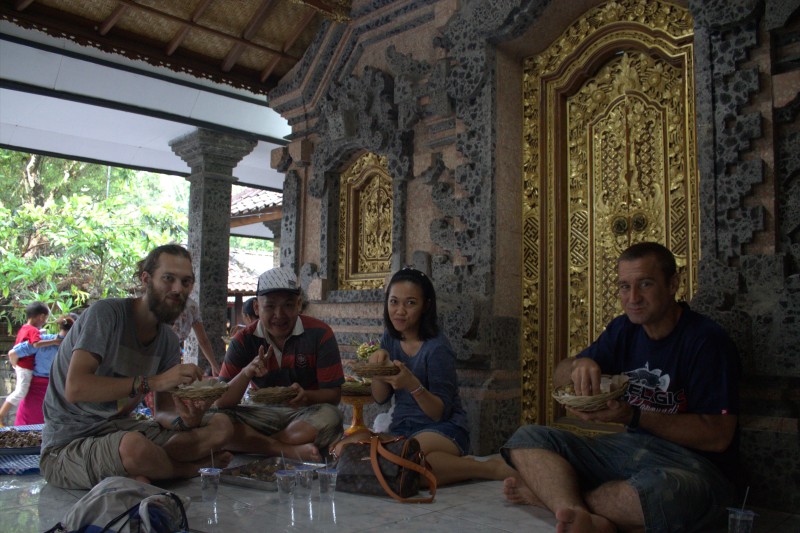 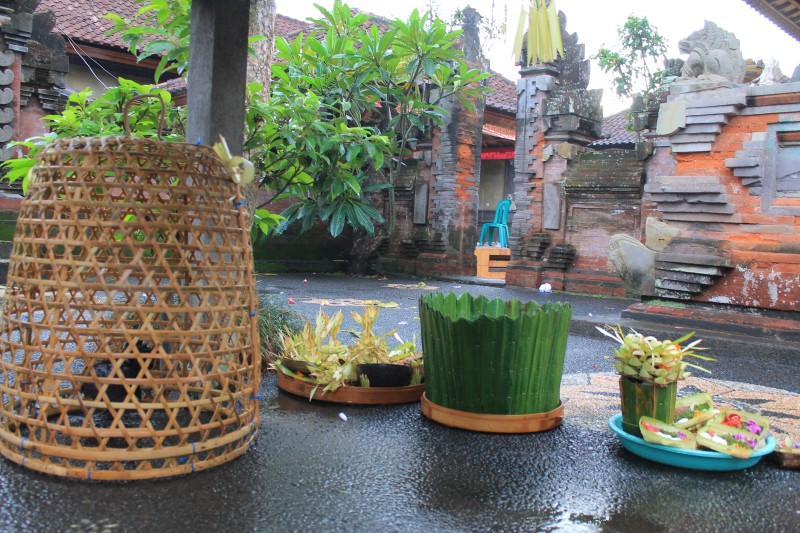 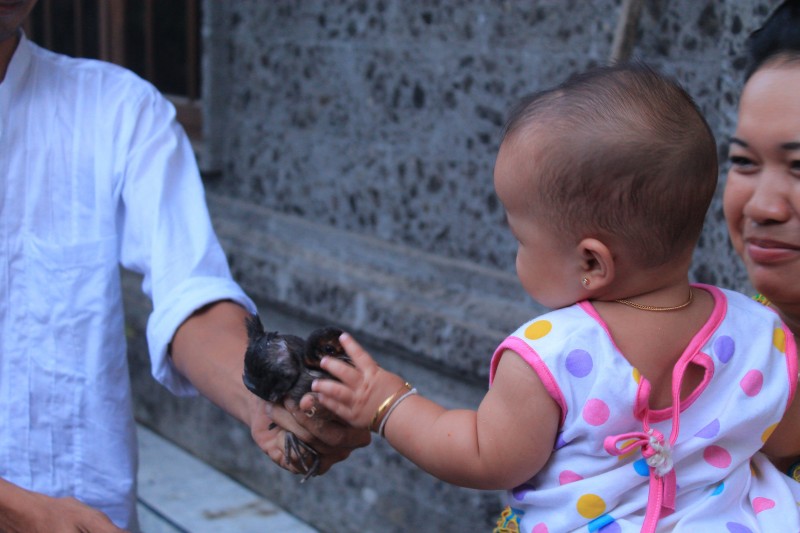 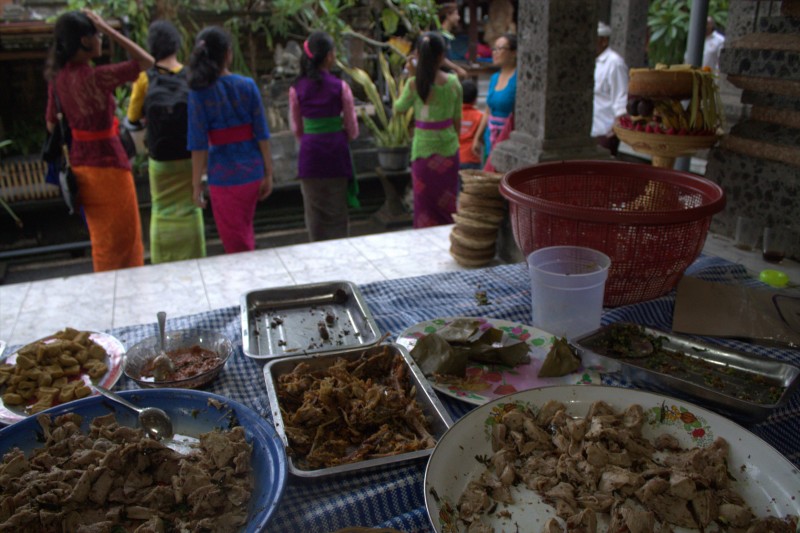 After 3 months, the newborn and its mother will leave the house and touch the ground for the first time. Up until this time, the mother stays in the house with the baby, that is not allowed to touch the ground.

Instead of throwing the baby into the deep, an eggplant is thrown outside, symbolizing first contact with the environment. The Hindus believe that by doing this, evil spirits that may surround the baby are “chased away”.

It is only after these 3 months that the baby gets his name, since it has now been introduced to the outside world.

After 6 months (210 days), the Odalan ceremony is held. The child’s first official birthday is celebrated. Every 6 months this ceremony will be repeated.

The baby’s first hair is cut off and the whole head is shaved, symbolizing purity. A pluck of hair is sacrificed by throwing it into the water. The scalp is anointed with Gangajal, holy water and turmeric – a yellow ginger. The paste means to protect the baby from injuries in everyday life.

After the last baby ceremony, calmness returns to the family’s house. The next ceremony is hold after the child reaches puberty. Since most Hindu families have several children, their peace and quiet don’t last very long. If it isn’t one’s own children that celebrate their “life cycle ceremonies”, children of relatives, friends and neighbors will surely.