Heat can become a real burden in Bali. In combination with the high humidity it can literally drag one down, making it tiring to set a step out of the air-conditioned coffee shop.

While staying in Ubud, we tried to beat the load of heat rays by looking for cool water spots.

Ubud is quite far from the beach or any place to go for a swim but there are some waterfalls nearby. The waterfalls are great for cooling down in the heat, especially in the rainy season when the waterfalls look more impressive and they are less crowded. We decided to research all of Bali’s waterfalls and visited some of them.

Most of Bali’s waterfalls are located in the North, near the mountains. So it’s far from the more popular places – such as in Kuta, Ubud or even more South like Uluwatu – it means it will be a long drive to get there.

Here is our list of waterfalls ordered from South to North

Very close to Ubud, Tegenungan is only a 15-minute ride in the direction of Sukawati. Also from Kuta it’s not far: about an hour drive.

The Tegenungan waterfall is big and impressive with several places to get a great view from a distance. Because of the convenient location and its impressiveness, this is one of the more crowded waterfalls. As a tourist hotspot, the price to get in is a bit more than elsewhere too: 10,000 rupiah per person. However, when we were there, we somehow missed the booth to pay and we could just walk in for free. It wasn’t until we got out that we found where we had to pay. Despite the crowd, it wasn’t hard to find a parking spot. Somehow most people there arrived by car. 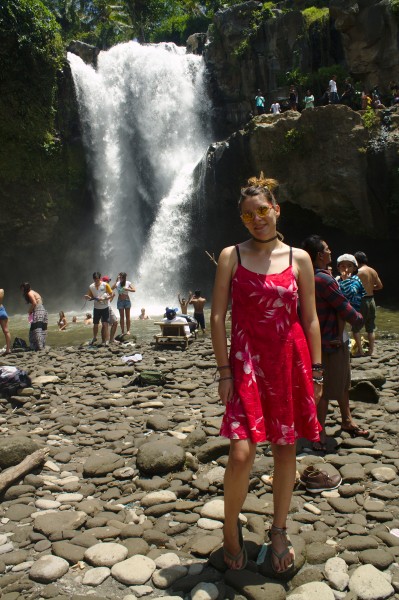 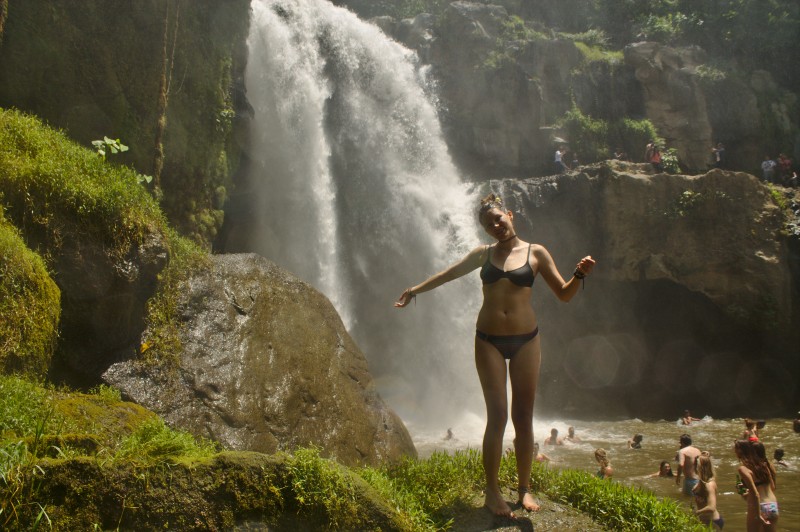 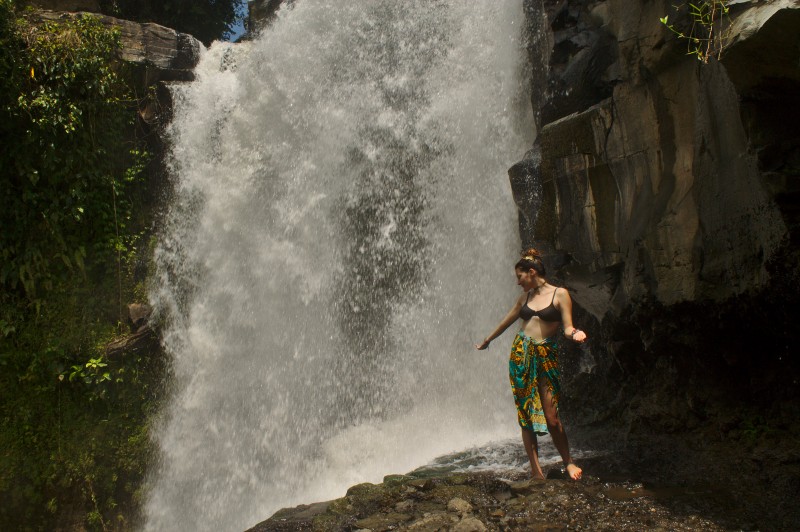 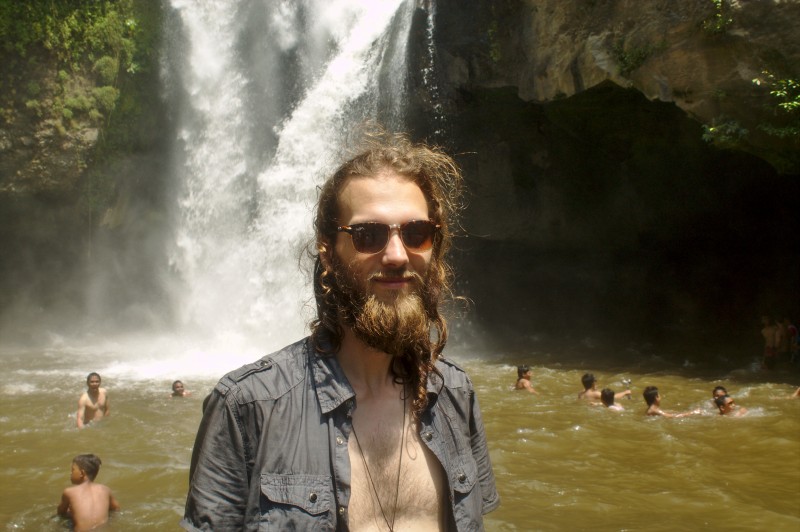 Pengempu waterfall is located in the Tabanan area but it’s still half an hour drive from the center of Tabanan. Also from Ubud it’s about half an hour away.

To reach the waterfall, take the road on the west side of the river. There are some stairs leading down and the path then splits up. The waterfall is to the left. When you go straight, you’ll end up in a place where you can go for a swim. The waterfall is quite small but it looks nice and refreshing. Follow the stream to a deeper area where some lianas hang above the water you can use to swing in the water. 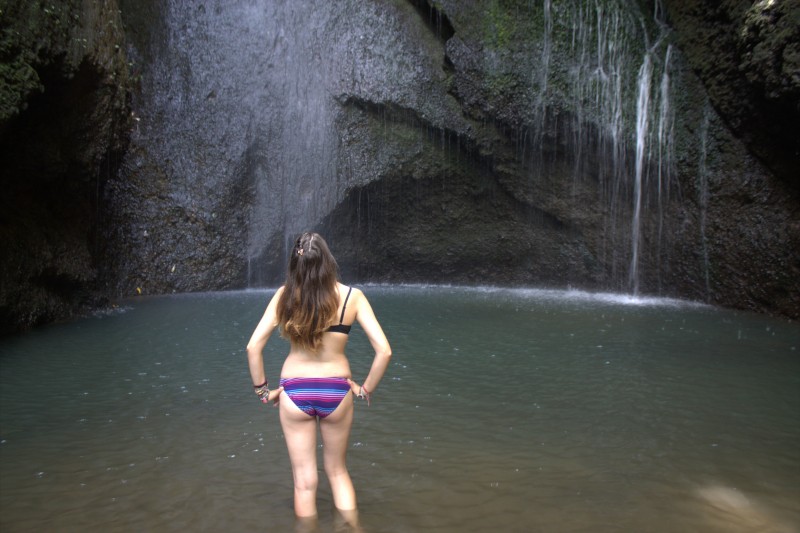 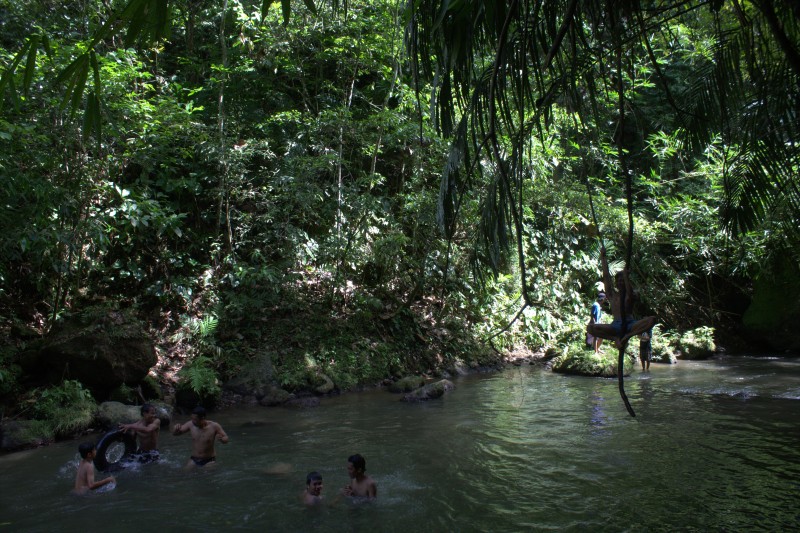 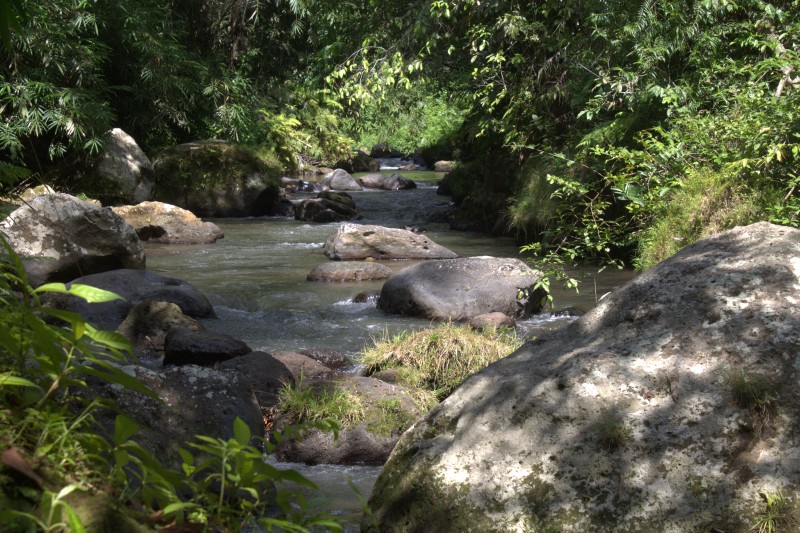 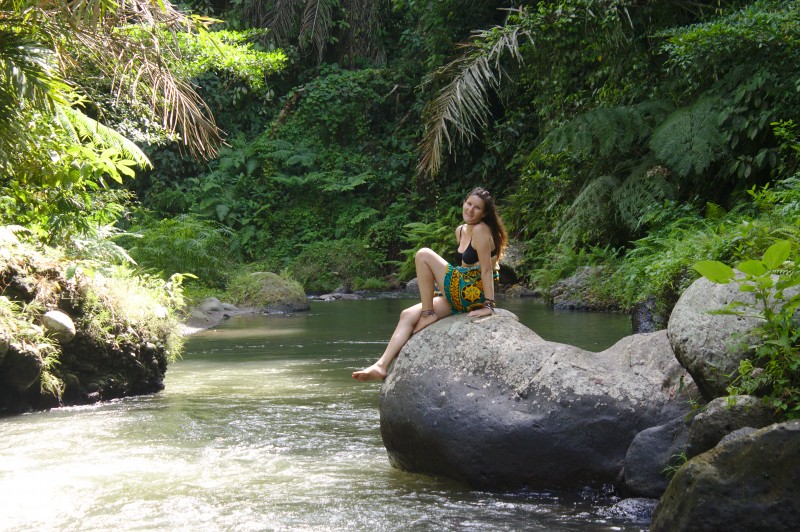 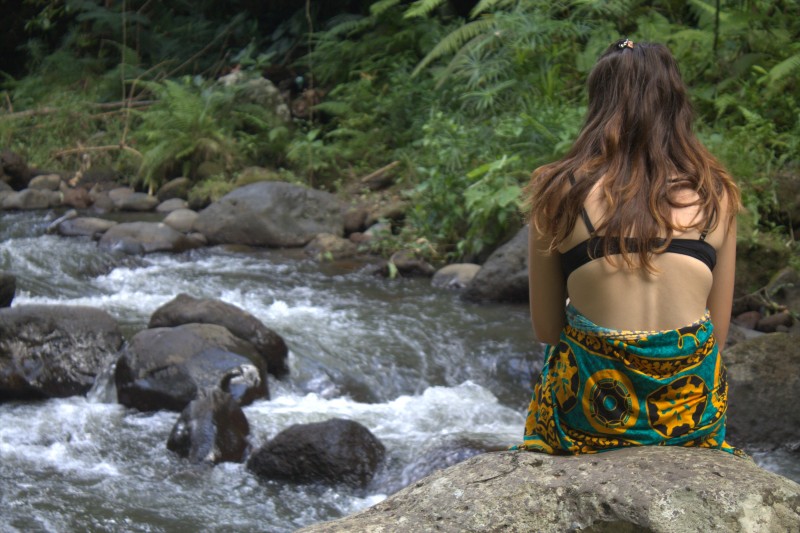 Gianyar, a town next to Ubud, has several waterfalls not far from each other along a small river: Yeh Empel, Tibumanan, Goa Rang Reng and Kanto Lampo.

Out of the four, we only visited Kanto Lampo. There are actually two waterfalls here; a bigger one with a lot of water rushing down and a smaller one you can stand under, like a shower. 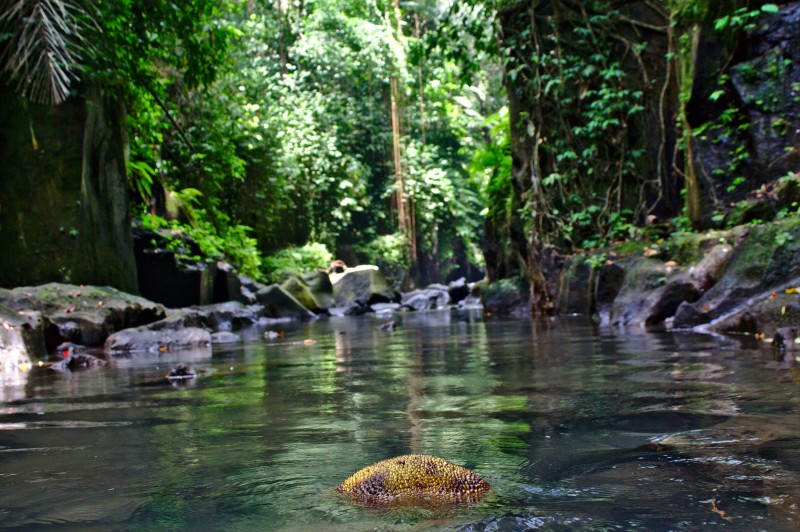 Stairs are leading down to the narrow river. You can get down into the water and swim through the deep end to the waterfalls or you can climb down the rocks to get there straight away. 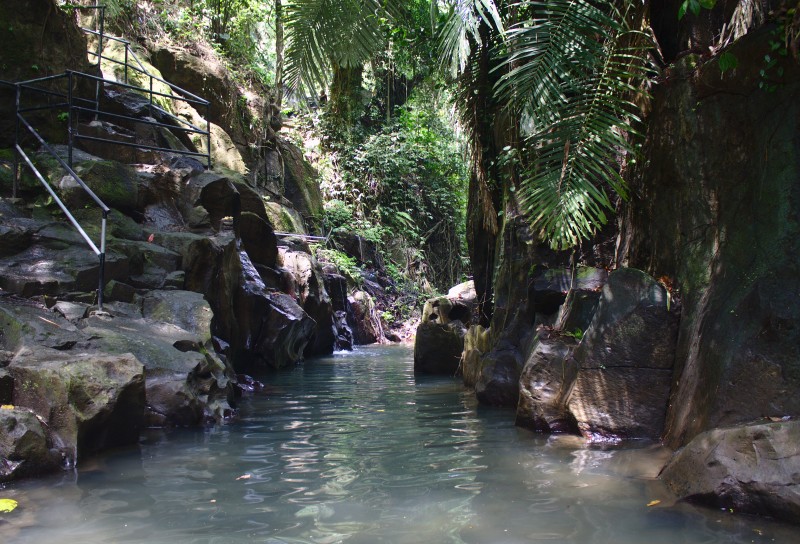 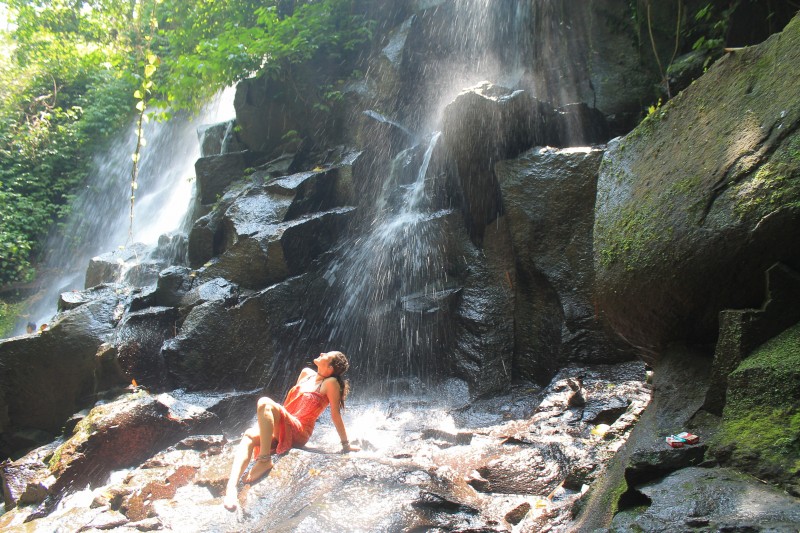 There’s one waterfall in the Penebel area: Yeh Ho waterfall. It’s about an hour and a half drive from Ubud. There are also hotsprings here and you will pass some nice, small roads surrounded by rice fields.

Near a small town called Plaga, there is the Nungnung waterfall. It’s about an hour North from Ubud. While driving up, you will notice the air is getting colder as you are getting closer. After paying the entrance fee, you can park and walk down. You will have to get down steep stairs with hundreds of steps but there are some little shelters (gazebos) on the way to take a rest, or in our case, take shelter for the rain. 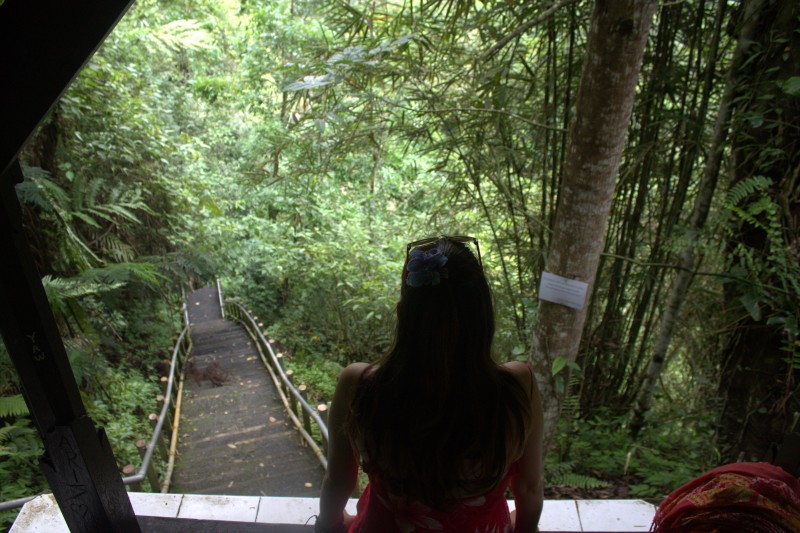 When you’re almost down, you can see a smaller waterfall on the other side with a small basin underneath. To reach this part, you will have to walk through the shallow water with sharp, slippery stones so there aren’t many people here. 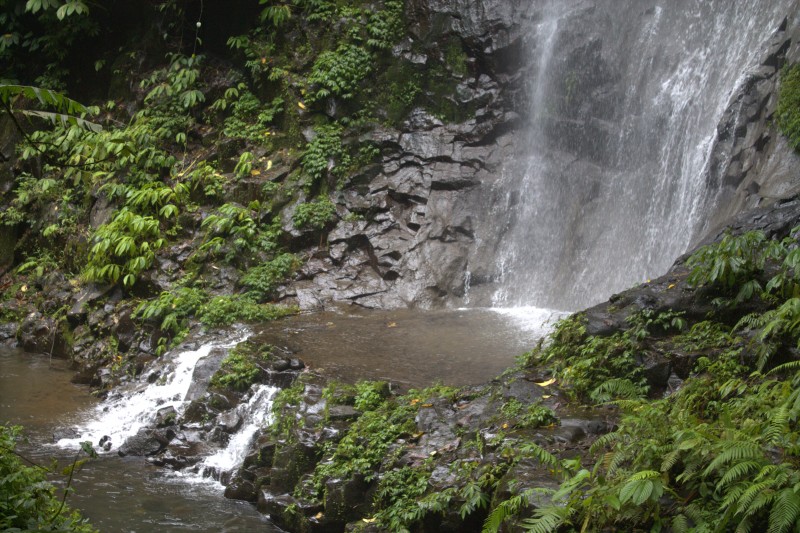 Keep walking to the end and you will see Nungnung’s big waterfall in a very green area. There is so much spray from the water that you’ll get wet as soon as you see the waterfall. This also makes it hard to get any good pictures; the camera will be wet immediately. 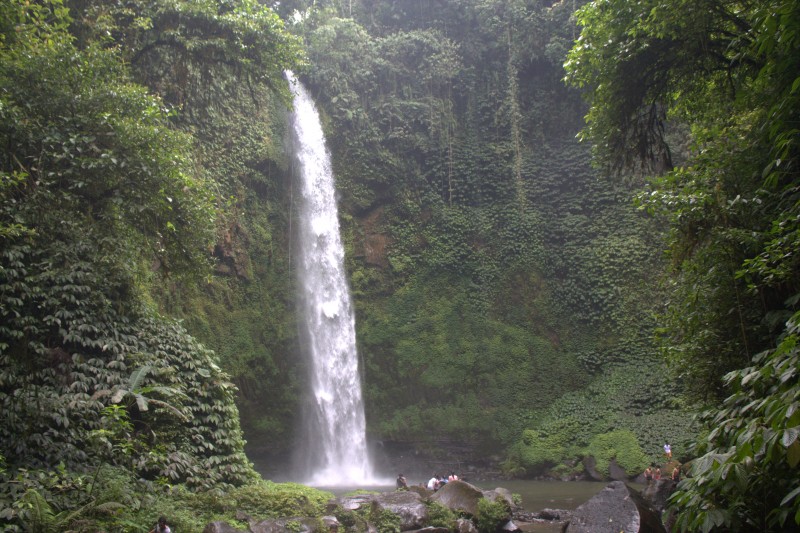 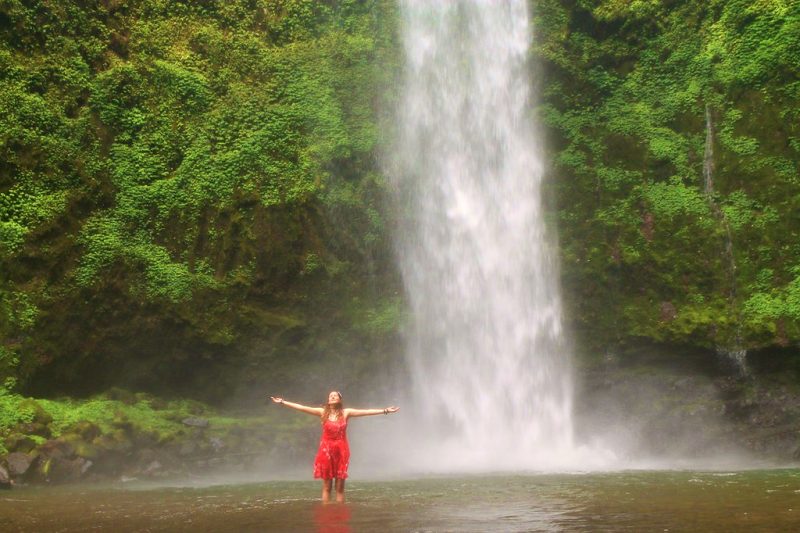 Most of the waterfalls are located near the lakes of Bali (Danau Tamblingan, Danau Buyan). When coming from the South, be prepared for steep, twisty roads in the mountains. To access the waterfalls, you will pass roads that are not maintained and are nearly inaccessible.

Blahmantung is a very remote waterfall, you won’t see many other people here but it’s also hard to reach; it’s one of the roads that are not maintained. It will be a bit of a walk as well. We tried to reach it from Ubud (a 2-hour drive) but we had to return after getting scooter problems along the way. From Lovina, it’s still an hour drive along mountain roads.

The Gitgit waterfalls are relatively easy to access, compared to most in the area and it is the most well-known waterfalls in Bali. It is therefore the most touristic. With tourists come scammers, so be careful not to pay a scammer instead of the official ticket people. Only buy from the people giving you an official looking ticket. The entrance fee should be 5,000, parking will cost 2,000. From the parking lot, the walk is about half a kilometer. Along the way, you will encounter many salesmen selling the usual Balinese products and refreshments found in all tourist areas of Bali. Some will try to make money as a guide, asking for a lot of money to show you the way.

Gitgit consists of three separate waterfalls. The first: Twin Waterfalls, a waterfall split in two. The water falls down into a cold basin, ideal to cool down. The second waterfall gets its water from the first and is a bit higher. The third is not accessible but you can see it from the bridge.

It’s a two-hour drive from Ubud, but only half an hour from the Northern town Lovina.

A beautiful waterfall with a deep basin (approx. 4 meters) underneath to swim in, or to jump in. Located in the village Sambangan.

Also a bit of a walk. It’s about 2 km from Munduk but about 2 hours from Ubud, passing the mountains.

Right next to the Golden Valley waterfall, about a 10-minute walk.

Very close to Gitgit waterfall. May be worth to visit if you happen to be near.

Also known as Niagara Gerombong. May be a bit hard to find again because of the condition of the roads and the waterfall not being signposted anywhere. There is a parking lot by the road; the road turns into a dirt road when going further. You’ll have to walk from there.

If you happen to be staying near Kubu, Tulamben or Amed – these places are supposed to be great for diving – then Yeh Mempeh waterfall is easiest to reach. The water flows from lake Batur. Again, you will have to walk a bit (approximately 20 minutes) to reach the waterfalls but the hike won’t be that hard. There are some fields and jungle to see on the way. Taking the road by scooter may be a bit challenging. Yeh Mempeh is said to be Bali’s highest waterfall.

You will probably encounter locals taking a bath here. Not many tourists have discovered this place yet. There shouldn’t be a fixed entrance fee but you may be forced to pay a donation.