Last time we wrote about our arrival in Tagbilaran, the main city on Bohol Island. The town was just another crowded, noisy place so we were glad when we checked in at a nice place called Coco Farm on Panglao Island the next morning. Panglao is a smaller island than Bohol but but is near Tagbilaran, just across a bridge. 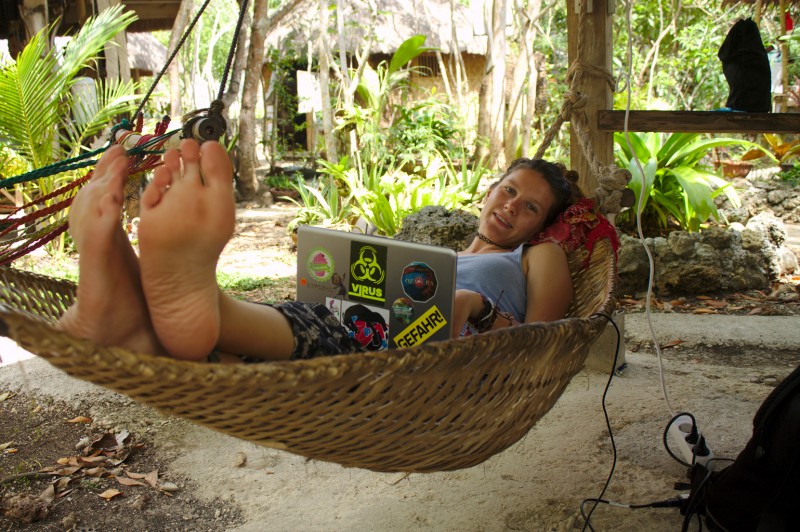 Coco Farm was in quiet, tranquil place. Nice beaches were all around but those were the tourist hotspots so we avoided it a little. It was a lot better to explore by scooter. The funny thing is, when we tell a rental place the scooter is too expensive, they just tell us where to get a cheaper one. In this case, at their neighbors. They wanted us to keep it secret but meanwhile, Coco Farm keeps sending people there, patiently waiting for someone with more money or less haggling skills. 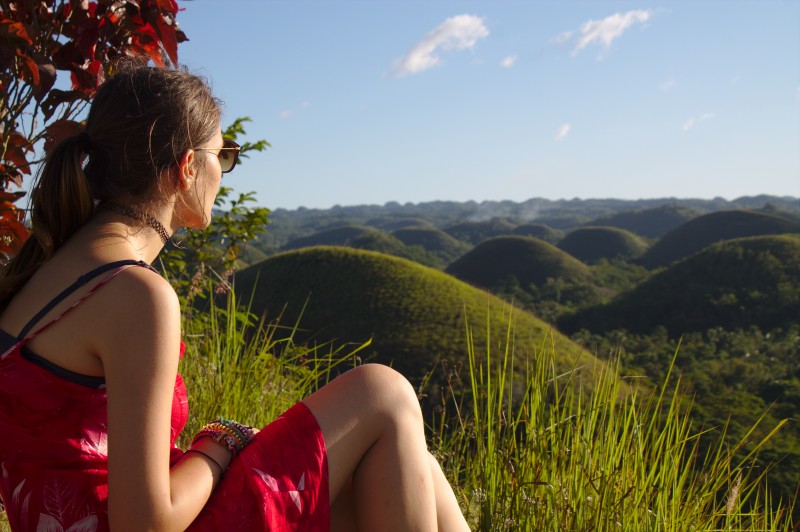 The first attraction we visited, were the Chocolate Hills in the middle of Bohol; remnants left behind by giants, according to legend, and we found some more evidence of giants on different parts of the islands. 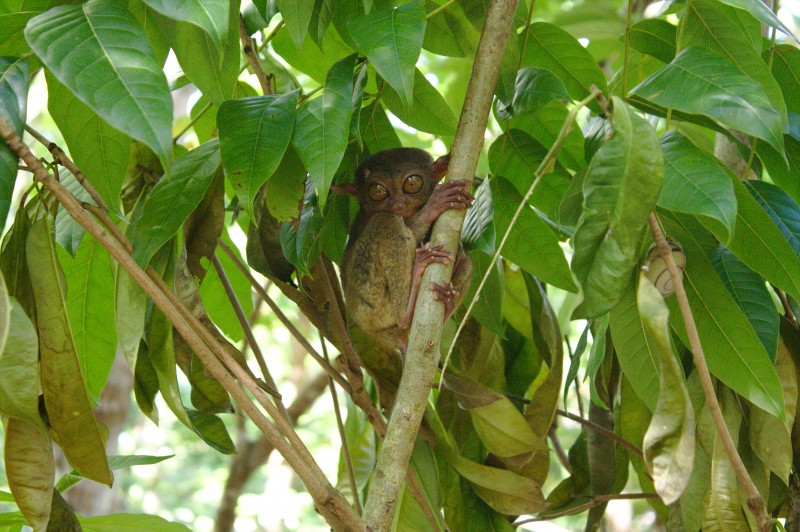 Tarsiers, tiny monkeys with huge eyes and living only in some parts of Southeast Asia, live in some conservation parks around Bohol. They are not easy to spot at first – they were definitely smaller than we thought – but we saw several. They are nocturnal creatures so they don’t do much during the day. They are said to commit suicide by banging their head when they are disturbed but there wasn’t much peace and quiet left when hoards of Chinese tourists started barging through. We didn’t see any suicides. 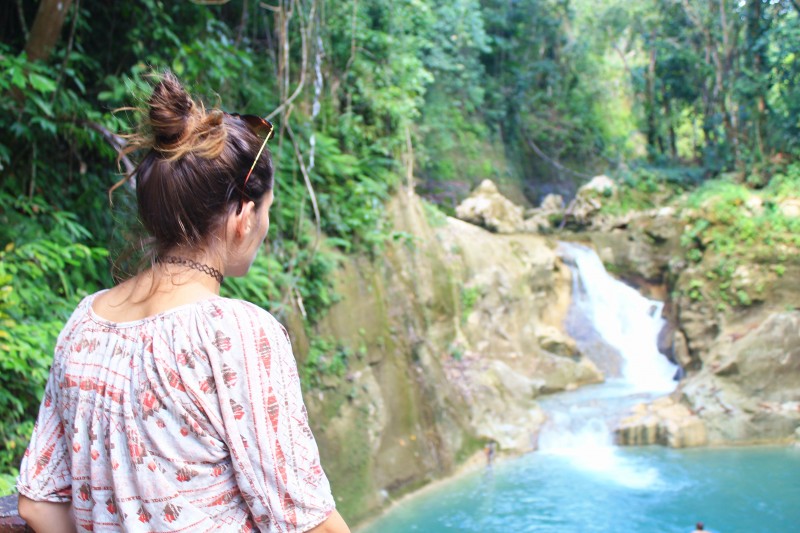 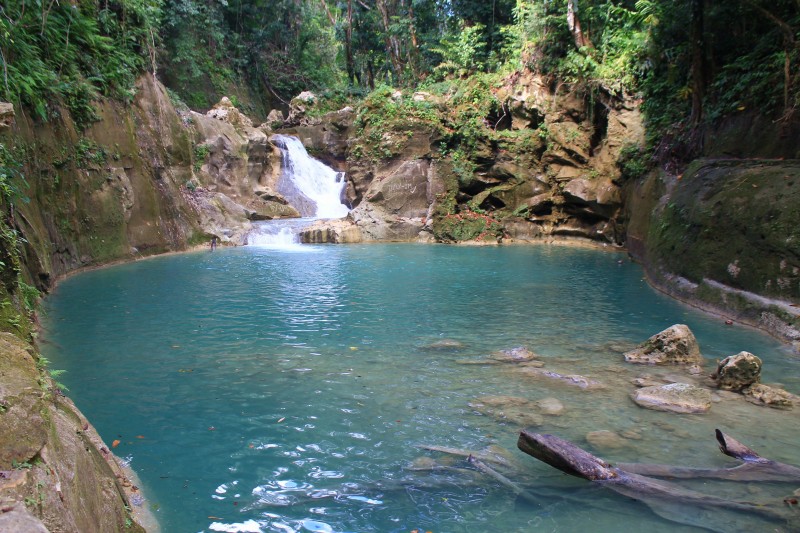 Then there is the Mag-Aso waterfall, one of the most beautiful places we’ve been to. The water had a nice azure color, the temperature was good and the water was deep enough to go for a swim. Most tourists seem to prefer the beach though, we almost had the whole place to ourselves. 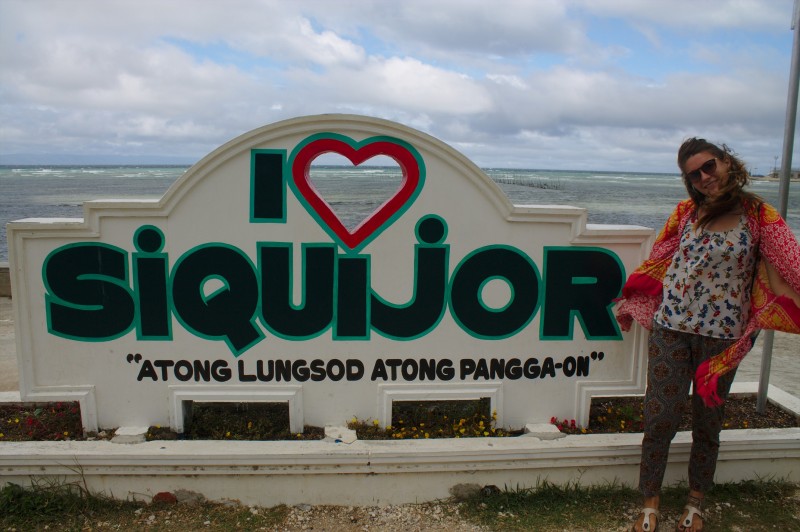 After our short stay on Bohol/Panglao, we took a ferry to the next island: Siquijor Island. We spent some nights at a hostel right on the beach. It was a good island to relax for a few days. 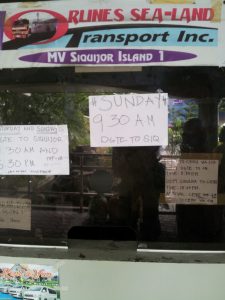 As the islands Panglao, Bohol and Siquijor are all small, a few days on each island was enough to see most of it. Getting from one to another island is always a hassle though; the only information ferry companies usually provide is written on a piece of paper on their ticket office window.

Although we arrived in Siquijor Island at the main port in Larena, we had to leave from a small port in Siquijor town. We convinced a trike driver to take us there for 70 pesos – a cheap fare for a tourist – but that meant he would pick up other passengers (locals) on the way. That was no problem for us but we could see they were all paying significantly less than what a foreigner has to pay. Unfortunately, that’s how it works in the Philippines.

A lot of people were packed in a small, cramped area at the port, waiting for the ferry to Dumaguete, Negros Island. We were with just a few people leaving on the cheap ferry, leaving the others behind to wait for the expensive OceanJet ferry that seemed only slightly faster than our slow boat as the trip was not far. OceanJet’s prices are about 5 to 10 times higher than usual, but their company is the only one that has a website, so for foreigners it often seems like it’s the only option but we we did our research beforehand.

From scarce online resources, we had a small list of affordable accommodation in Dumaguete but none of the prices were current; it seems prices almost double every year. We found affordable place in the center called Aldea Lodge but we didn’t have internet and the shared bathroom was a bit of a walk. A radio station was right across the road, they blasted their broadcasting through speakers all day long, trying to be louder than the busy traffic. The room was full of ants and we had to kill a huge cockroach that was hiding behind a cupboard. Luckily, it was the only one; the streets were full of those disgusting things.

Dumaguete is known as a motorcycle capital because of the many motorbikes and scooters here, so we expected to find a rental easily. Coming from Siquijor, where you can’t walk for one minute without seeing a rental shop, it was a bit of a shock to find there was only one rental place in town – or, within walking distance, at least – having only one Scoopy left. We needed a scooter to explore the island, the city didn’t have anything to offer. 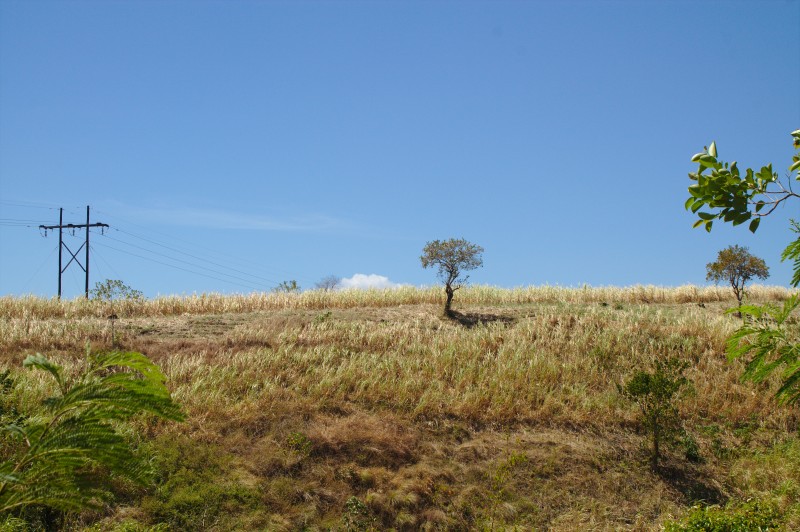 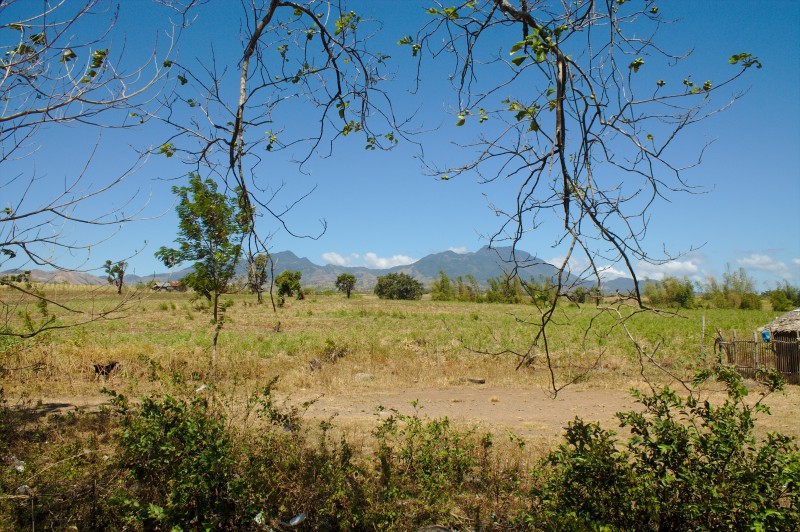 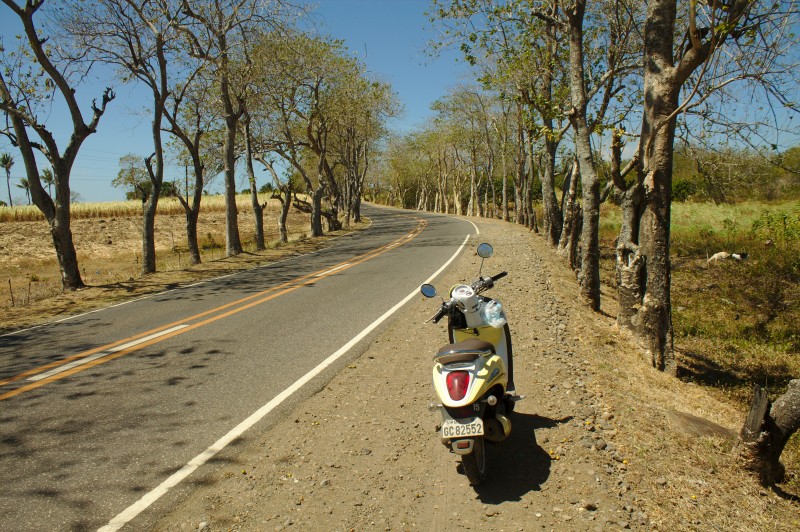 Negros is a lot bigger than the previous islands but we felt there was also a lot less to see. It was nice to drive around in the Southern because of the dry, yellow landscapes, reminiscent of the Nevada desert. The temperature felt like a desert too but it completely changed the following day. We only had grey skies and showers from then on.

North of Dumaguete, we visited the Twin Lakes. We didn’t know what to expect. While driving through twisty mountain roads, temperature dropped and it started to get foggy and wet. It felt like a very long way, but it was a beautiful scenic route with volcanic rocks, great views and cattle on the street. Near the end of the 30-kilometer-long road, we could only continue after paying an entrance fee of 100 pesos each plus scooter parking. We didn’t know there would be any entrance fee and we definitely didn’t think it would be so much, but we made it so far so we got in. The ticket showed we paid the “foreigner” price. 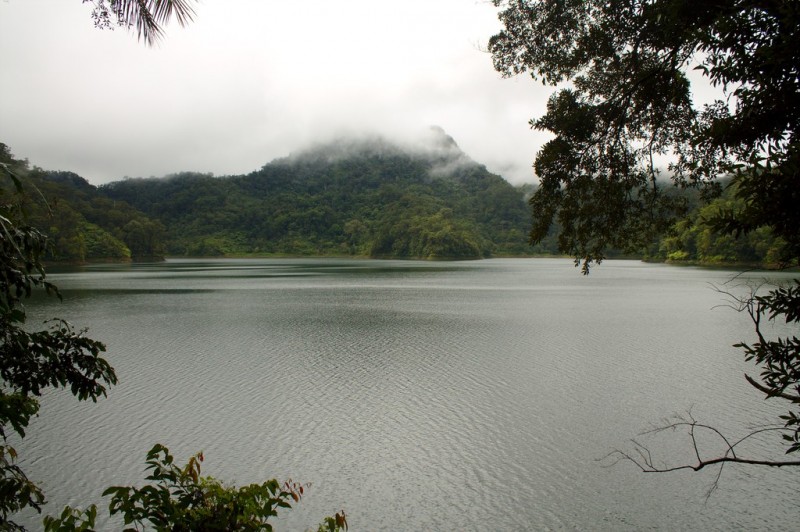 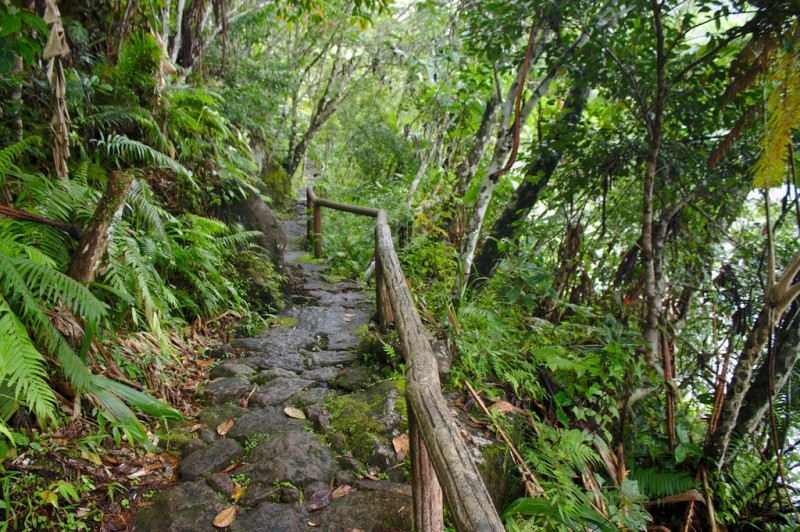 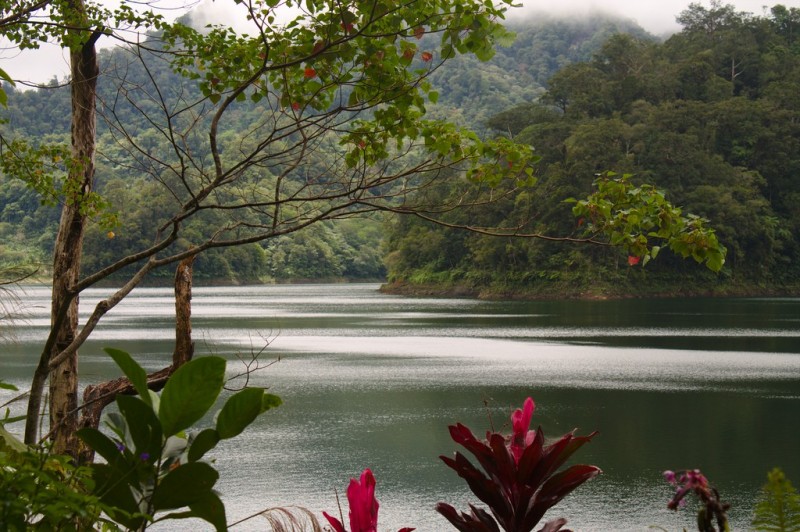 After parking and walking down some stairs, we found the beginning of the lake. The lake could be passed by getting a boat. But, of course, we would have to pay separately for this – 250 pesos this time. There was also a walking trail, the entrance was a bit overgrown. A sign said it was only a 900-meter walk so we decided to go for it. We passed half the lake by a very rocky path. We didn’t go all the way though. We stopped and sat for a while at small hut, taking shelter for the rain. 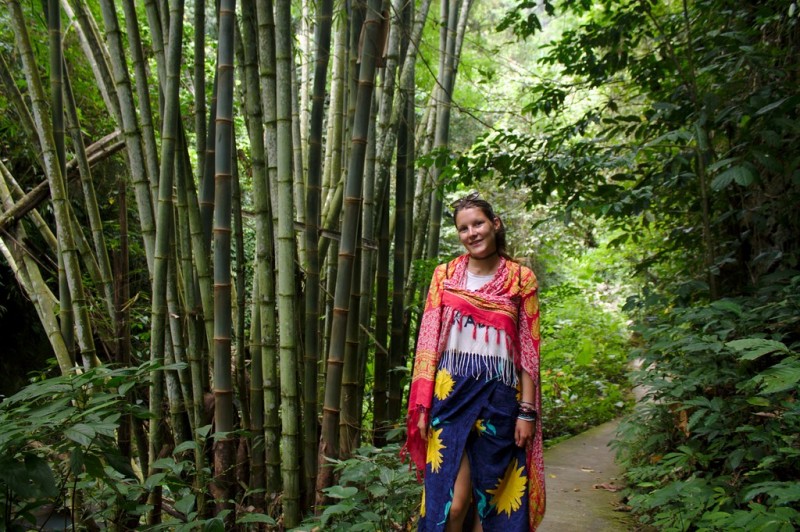 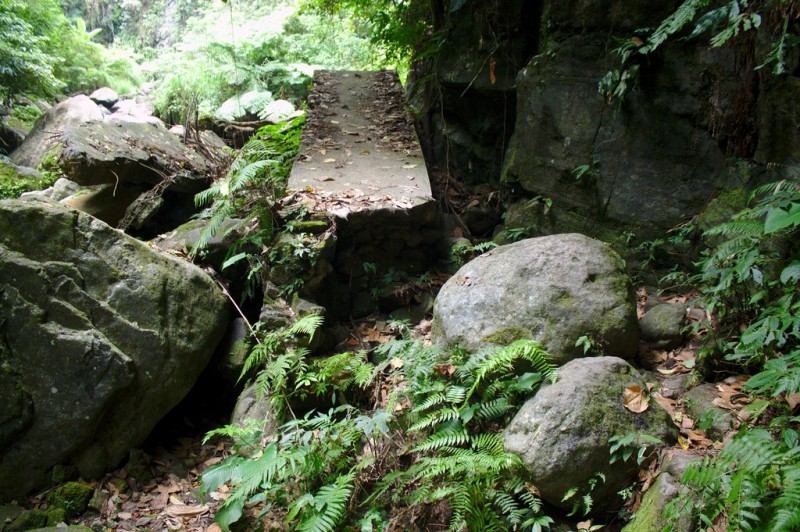 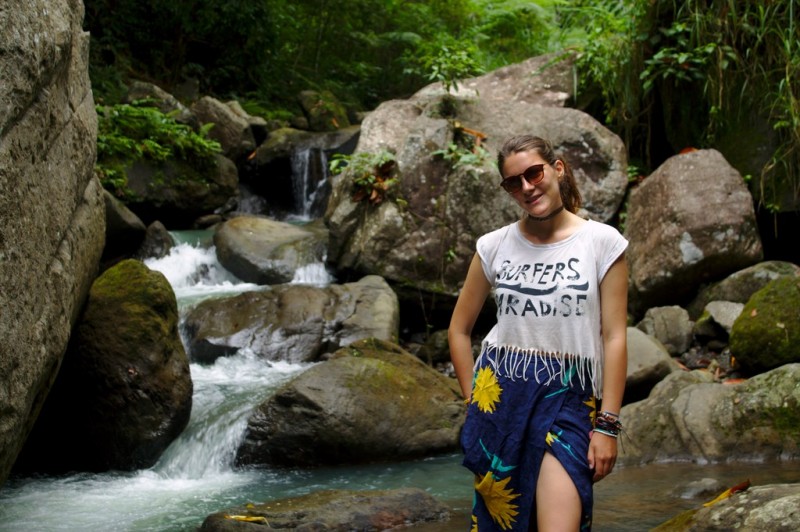 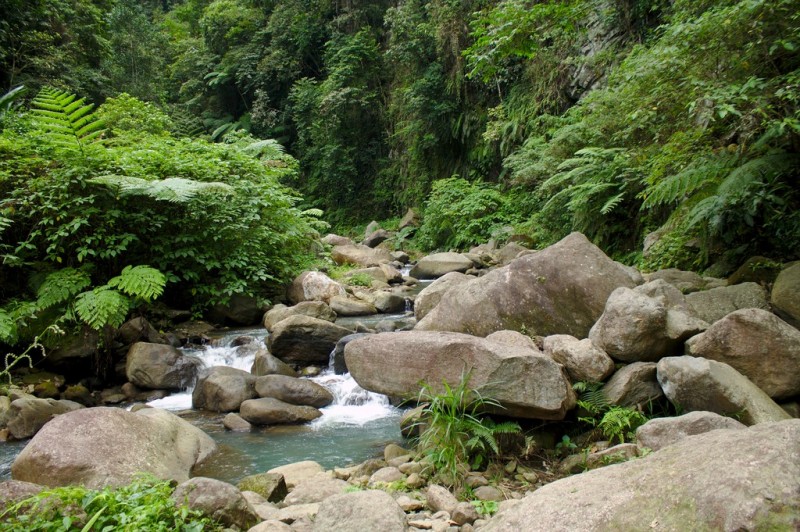 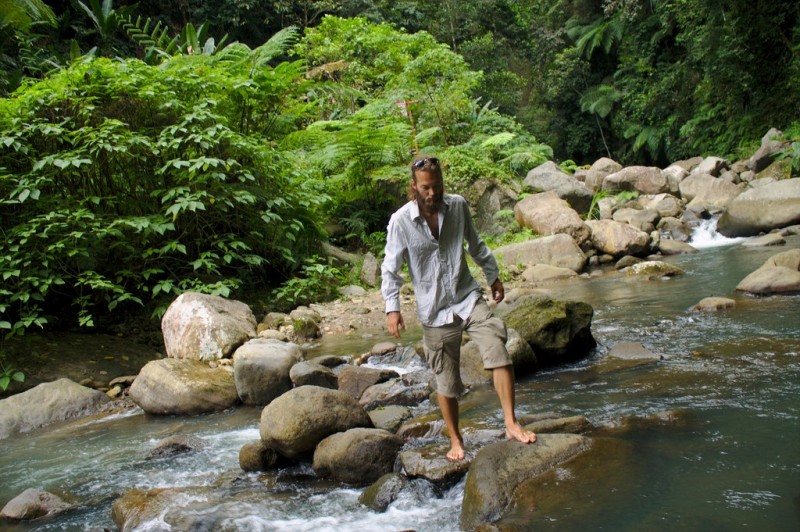 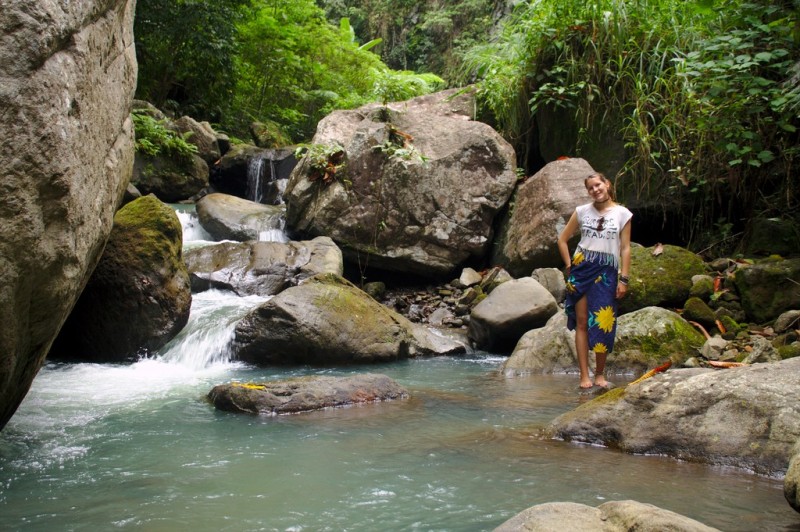 We also visited a waterfall (Casaroro Falls) in Valencia, a town next to Dumaguete. The walk up there was nearly impossible. The path had been completely destroyed. We were told to cross the river twice, then climb up more. We didn’t expect that crossing the river meant ignoring the danger signs and going through the water (as the hanging bridge was also destroyed). We didn’t make it all the way to the waterfall itself but there was a small waterfall with some clear water halfway.

It was time to head back to Cebu Island. With the changing weather, we wanted to be in time, in case the ferries stopped their service.

To leave Dumaguete, it took some work again to find out how to get back to Cebu Island. The ferry companies at the port didn’t have much. We then found out we had to take a bus to another town (Tampi) to take a ferry from there to Bato on Cebu Island. From there, we had to take another bus to Moalboal.

Trike drivers immediately surrounded us as soon as we got off the bus, wanting to drive us to the beach side, where all the accommodation is located. Their asking price was 150 pesos. We just paid 90 pesos to drive 90 kilometers so we figured we could walk the last 4 kilometers.

Moalboal is actually quite small; there is not a lot to do. There are no shops, just expensive restaurants and most people come here to dive – the kind of people who generally have enough money to spend. It’s not really a place for backpackers; scooter rentals, food, accommodation is all more expensive than what we’re used to.

Still, it’s a good place to relax a bit. We have internet and a pool so we stayed some nights as we are taking the planes the next weekend. First Cebu to Manila; then Manila to Kuala Lumpur, then we hope to get to Cambodia but we haven’t gotten any confirmation of this flight yet. Hopefully it all goes well and we’ll arrive next Monday (08/02/2016).

One comment on “From island to island in the Philippines”