How much does it cost to travel Greece on a budget? We will give you an indication of some of our spendings to show how expensive Greece is. Prices may vary from shop to shop, the prices indicated are the cheapest price we found.

We spent some time in the Balkans before arriving to Greece. So far, the most expensive country was Croatia where we spent some time during August, the most expensive season of the year. Bosnia and Herzegovina, Montenegro and Macedonia were reasonably priced when we arrived in September. With the high season coming to an end and the weather getting colder, we were hoping to get some sunny days down South, in Greece. Of course we expected Greece to be a little more expensive because they are a euro country, but it was still a shock to see how expensive Greece was, in particular transportation and accommodation.

During our trip around the Balkans, we usually paid under € 20 for a private room or we rented a car for a similar price. In Thessaloniki, we were not able to find any accommodation during our first night so we decided to walk and ask around. Surprisingly, almost every place was fully booked. We found a hostel that wanted to charge € 15 each for a bunk bed, when the night was almost over already. We decided to wait until the next morning instead and got a train down South.

We had googled for information regarding bus and train prices and it seemed the trains were a good option. Unfortunately, the information we found was probably outdated as the prices were a lot higher. We were still unsure of where to go and randomly selected Katerini, a town close to the coast South of Thessaloniki. This cost us € 9 each. The train was very crowded and there was no luggage space. When our train quickly arrived in Katerini, we felt it was a high price to pay for such a short distance.

Once again, it seemed the country was hard to explore without our own transportation, so when we passed a car rental shop in town, we asked around. The rental place had a wide selection of cars, parked just outside, including a limosine and some big, American trucks. Maybe this should have been an indication that they would cater to the rich folks because indeed they couldn’t offer us anything. There was one old, tiny car that probably couldn’t fit our luggage they could offer us with a discount: € 35. So, no thanks.

We took a bus to the coast, to the little town of Paralía (which simply means Beach in Greek), costing € 0.60 each for about 6 to 7 kilometers.

Upon our first arrival, it appeared there were no people left in Paralía. That is, until we found the beach: this is where all the people were hanging around. It took a while for the town to come alive; around sunset, the tourists left the beach to slouch around the little streets, looking for food or cheap clothes. We realized we stumbled upon a Serbian colony. Nearly all cars had Serbian plates and the only language you could hear was Serbian. Bakeries even sold burek. All rooms that were available to rent, were signposted with “Sobe”, as in Croatia, and we asked around for prices. Usually the price was € 25 or € 20. We booked a place near the beach for one night and continued our search the next day. That’s when we found an apartment for € 15 and we booked 3 nights.

In October, the nights started getting colder. We wanted to pack light for our trip so we didn’t have any winter clothes. Luckily, there were many clothes shops in Paralía where the prices were very decent. In fact, shopping for clothes can be cheaper than eating or drinking – some shirts and dresses cost less than a coffee (which can cost around € 3 here). We got ourselves two hoodies and new shorts (€ 40 total) and Tina bought new sandals (€ 5). This turned out to be a good decision when the very next day the summer was over in Paralía. Beaches turned empty, the sky turned grey.

For regular groceries, there are two supermarkts. First, Lidl: very popular despite the small selection. Be sure to take your time to wait in line at the register. A little closer to the beach, there is Πίτσιας (Pitsias) with more stuff, better prices and no long lines.

From Katerini, there were no busses going South, only trains. When we heard the price, we decided to try hitchhiking first. There was barely any traffic and we didn’t have a good spot. As it got later, we felt we had no choice and got back on the train: € 19 for both of us.

We didn’t find any affordable accommodation online. There are no hostels in Larissa either and unlike Paralía, there were no people renting out their “sobe” (rooms) and we didn’t find any host on the hospitality networks – nobody even took time to reply – so we had free accommodation in the park (park Alcazar), which was not the best place, but at least it was very quiet at night.

The next morning, a Sunday, we learned that all supermarkets in Greece are closed on Sundays. Hungry and still tired, we came across a bus station. We warmed up here and shared a coffee (€ 2). They had free wifi and we finally got a reply from a very friendly and generous South African Couchsurfer living in Larissa. She offered us a night to stay and even prepared a meal and drinks for us. The next morning, she dropped us off near the IKEA (near the small neighbor town Nikaia) where we continued hitchhiking.

After some time, we almost felt like giving up on getting a ride, but we were almost in the middle of nowhere so we had to keep going. It took us 3 hours (or maybe more) to get a ride to our next destination.

We were dropped off at the bus station in Volos where we finally got a reply from a host. He was able to host us for a night in his nice house in the mountains and he helped us drive around Volos the next day to look for a rental car. It wasn’t easy. There is no point in asking the bigger companies here; they just say their exorbitant price and you can take it or leave it. Eventually we left with a car for € 25 per day from a smaller rental company. Although still not the best price, the rental company claimed the regular price was € 45, so the booking had to be done “outside the system”: cash only. The car was also our accommodation so we got a good deal because there are no hostels around and we didn’t come across any affordable places – the cheapest accommodations start at € 40 a night.

As with many Western countries, to own (or rent) a car means the state assumes you’re rich and they can start squeezing you for more money; in Greece it’s toll roads and fuel prices. Around Volos, the toll roads are easy to avoid but fuel is a different story. All those mountain roads cost us more fuel then we were hoping for and we had a lot of rain, so we spent more time in the car than we would have otherwise. At one small petrol station called Eteka, we paid € 1.435 per liter, but all other petrol stations charged more – over 10 cents more, in some cases – so we didn’t mind the extra drive to fill up for a fair price. One surprising fact: parking was always for free and Greeks don’t really care where you park either. “No parking” signs can mostly be ignored and simply turning your blinkers on turns illegal parking into legal parking.

You will notice that Greeks love their “7 Days croissant”, a croissant with chocolate filling packed in plastic, and chips. These are the items we usually ate as well. In the Balkans, we ate at bakeries every day, but when we had a look inside the “bakeries” in and around Volos, it wasn’t what we expected. You could call it a candy shop because the first you’ll see are fancy, sugary cakes and cookies. The only “bread” they sell, are pre-made, plasic-wrapped sandwiches that you would expect to see in a gas station (also for gas station prices) and outside of Paralía, they won’t have burek either… 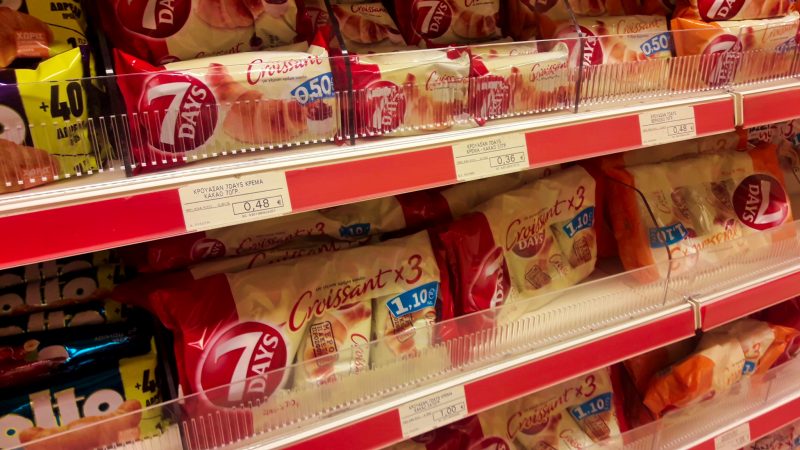 We already spent too much money and we wanted to leave Greece. The weather was still terrible, making hitchhiking a lot harder. We took the overprized bus to Athens (€ 30 each) but we found accommodation for € 15 – quite reasonable compared to most rooms we found in Athens and there was still nice weather here. However, we could only stay for one night and booked two nights elsewhere for € 25 per night – the cheapest at that time – but an extra € 12 “cleaning fee” was added after the booking (thanks to Booking.com).

There are a bunch of hostels around Athens where bunk beds are relatively cheap (€ 9.50) but don’t forget: they charge per bed not per room. For this reason booking a private room is usually cheaper for 2 (or more) people.

To get around in Athens, we each got a 24-hour transport ticket for € 4.50, but nobody ever checked so we could have gone without.

We asked in an agency that advertised rental cars, “Do you have any rental cars?” The clerk immediately replied: “Yes, a car is € 75 for 24 hours”, without looking up from her work, knowing what our answer would be. Currently, outside of the high season, the cheapest rental cars still cost around € 40 per day.

The Acropolis can be seen from all over Athens – when you’re not behind a building at least – and this is the first place we walked up to. It was still extremely crowded here. There was a huge line to buy tickets, then an even longer line to get up to the Acropolis. The entrance fee for the Acropolis is € 20 so we decided it was better to see it from one of the viewpoints instead. Nearly all other sights charge entrance as well, even though you can usually see the site through the fence bars.

We were glad to find that our apartment was near a real supermarket, not just a minimarket or a small supermarket with little selection: Σκλαβενίτης (Sklavenítis). Although the selection was better, the prices weren’t always that great. For example, good frozen pizzas are cheaper from the pizzeria, the cheapest pizzas are really not worth it (and still overpriced) – we know from experience. Finally, we did spend some money on expensive alcohol because our last host introduced us to μαστίχα (i.e. mastika or mastiha). An ice-cold mastiha should definately be tried while in Greece, it’s one of the best liquours we’ve drank and Greek ouzo comes close to the top as well. 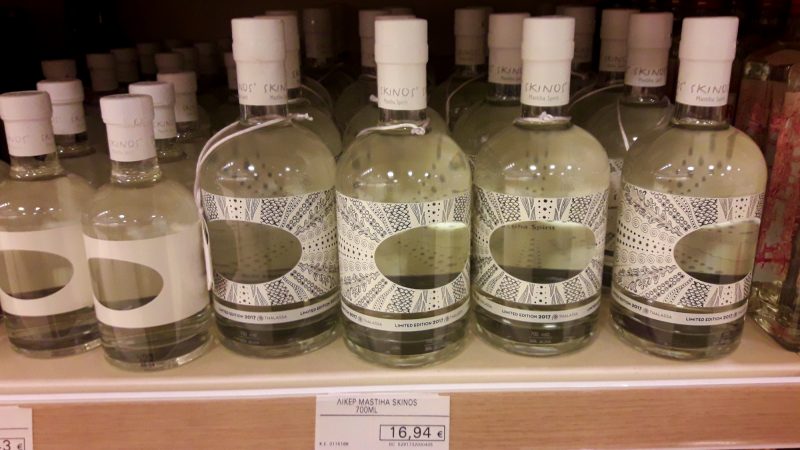 In our opinion, Greece is not budget-friendly, especially for spontaneous travel. Probably the best way to see Greece, is to pre-book your flights and accommodation well in time and to only stay in the cities. But for us, we weren’t sure we would end up in Greece until we booked our bus. We left Athens by taking a bus to Brno for € 90 from Korona Travel, which is a relatively cheap price for such a distance.

Comparison to other countries

To compare Greece to other European countries, also have a look at how much traveling costs in Macedonia, Greece’s neighbor country, and how to travel Montenegro on a budget.