When we explore a new place, we pass hundreds of streets. Often without even realizing it. However, if we realize it, it’s due to the fact that something caught our attention. Sometimes we become fully aware of a certain street or corner just because there is some fascinating mural making us pause and reflect about its meaning. 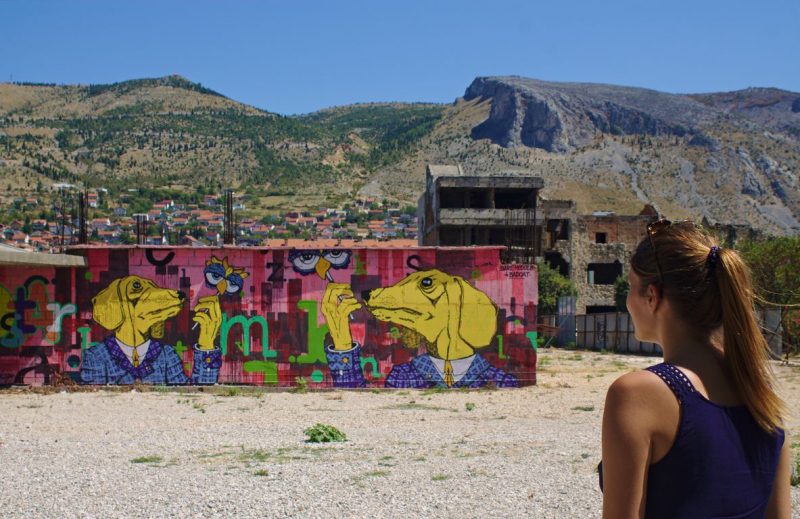 Street arts is a powerful means of expression pointing out political, social, cultural or personal topics and shortcomings.

Whenever we visit a new place, we keep our eyes peeled for a new dose of street art. So far we discovered the colorful streets of Lisbon and Prague.

Street art in Mostar is not only popular among locals and tourists but has also attracted the attention of the international street art scene. Since 2012, the city hosts a Street art festival each year which welcomes gifted street artists from all over the world among local talents.

Originating from the idea to use the powers of arts to heal from a long history of division, street art has become an integral part of Mostar’s cultural landscape promoting peace and diversity.

If you want to read more about the divided city of Mostar and my perspective as a native on the current situation continue to this article. 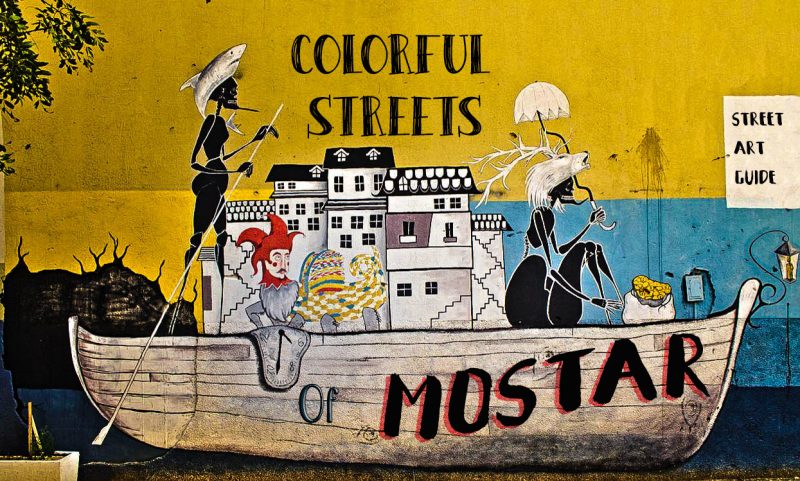 The city park of Mostar is located in the center near the Gymnasium and the Spanish Square. Not only the unusual monument of Bruce Lee will baffle you, the park is also filled with plenty of street art. 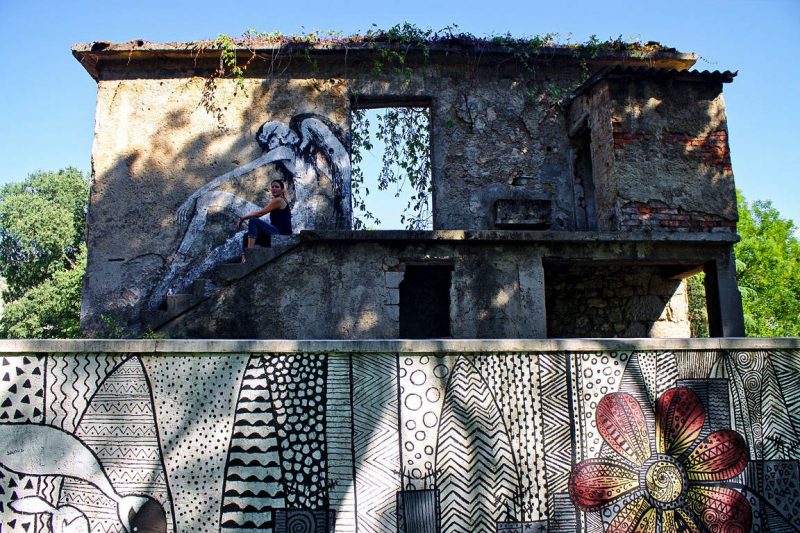 An angel sitting by the entrance of a shelled building. In Mostar you will find many artworks on war-torn buildings. They once were a home to someone, maybe a public place, a safe space. Now all is left are scars. 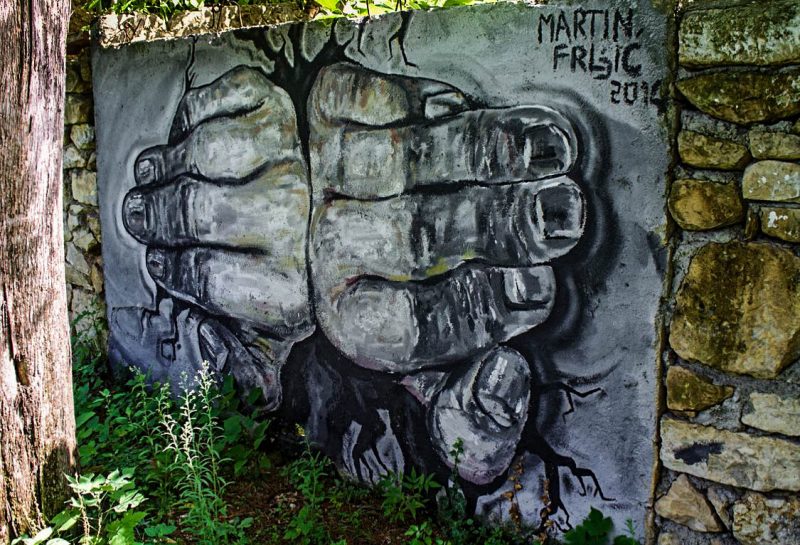 Walls have whatsoever been a symbol for the cruel separation of people. In Mostar, it’s not physical walls but walls in the heads of some people that still divide the city.

Before the war the bridge united the city of Mostar. Even though it was rebuilt after the war the two opposing ethnic groups remain distant. Reconciliation is an ongoing process and keeps being difficult to achieve.
Park Zrinjevac 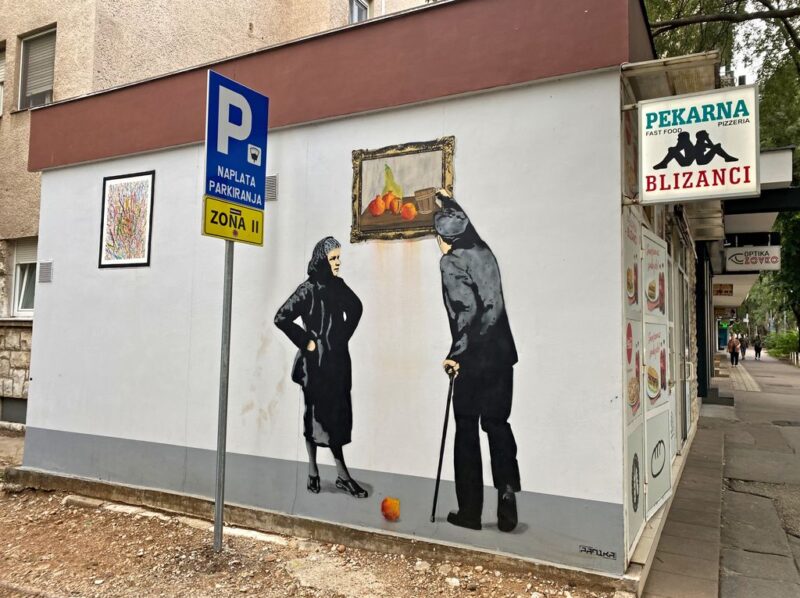 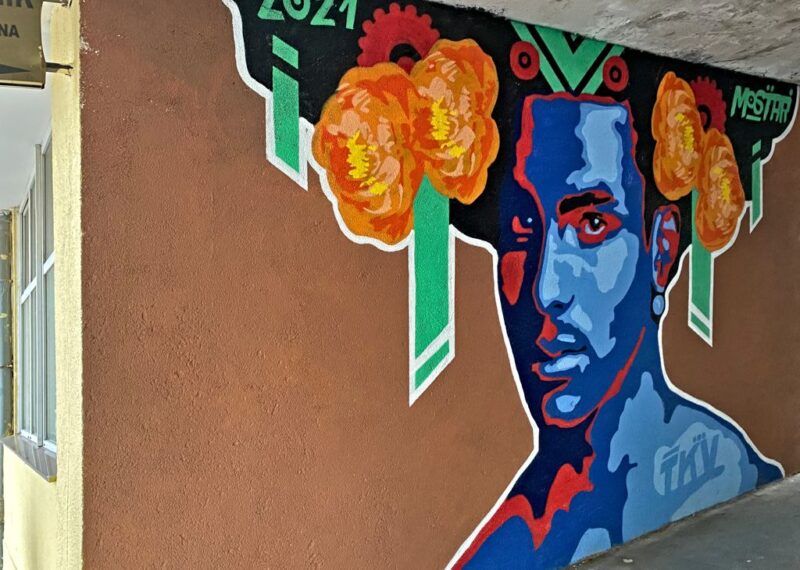 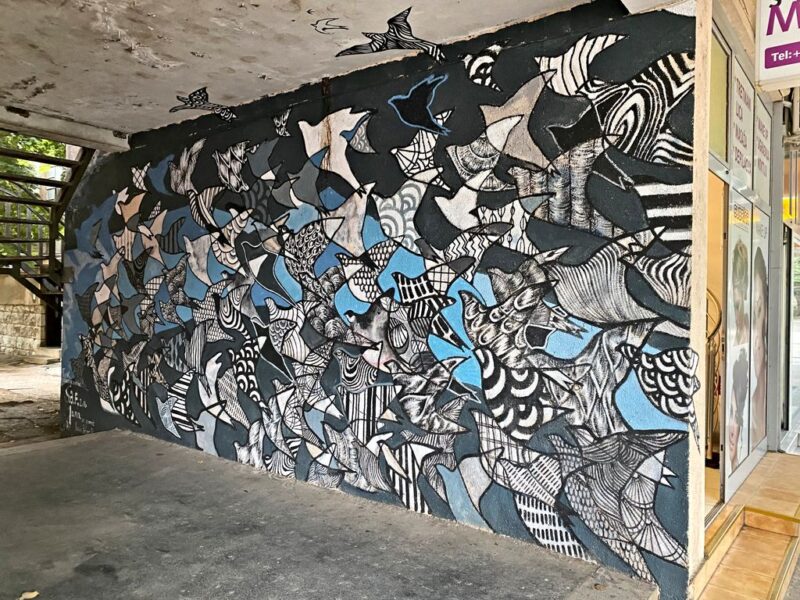 Around the Sniper Tower

The sniper tower has become an infamous symbol for the cruelties committed against the civilians during the Croatian independence war. The tower was strategically positioned at the front lines of the conflict. 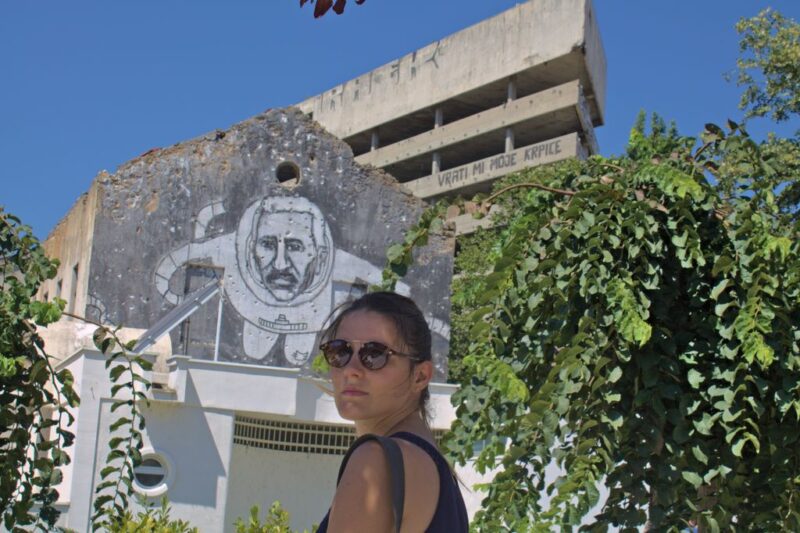 The west side was controlled by members of the Croatian Defense Council (HVO), a military organization formed by Bosnian Croats. They were hiding out in the tower and targeting Bosnian Muslims but also other civilians lost their lives in the area around this tower. 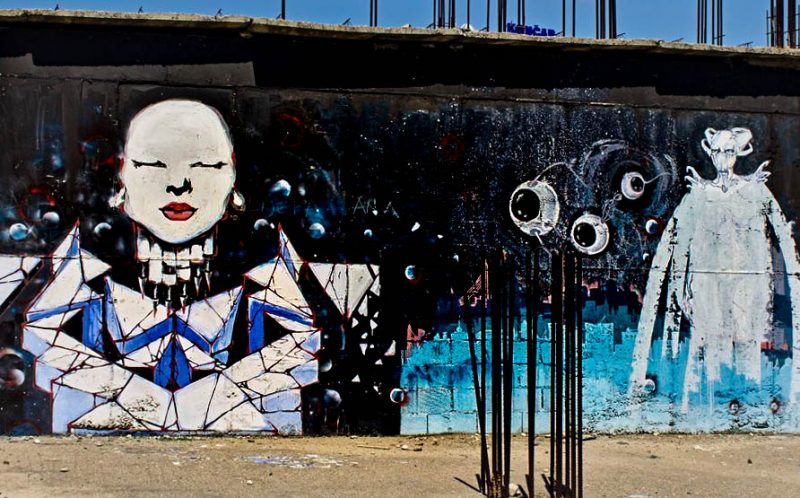 Even today the tower sends out eerie vibes. You will find plenty of street art on the walls. The tower will likely remain abandoned, serving as a reminder of a dark past. 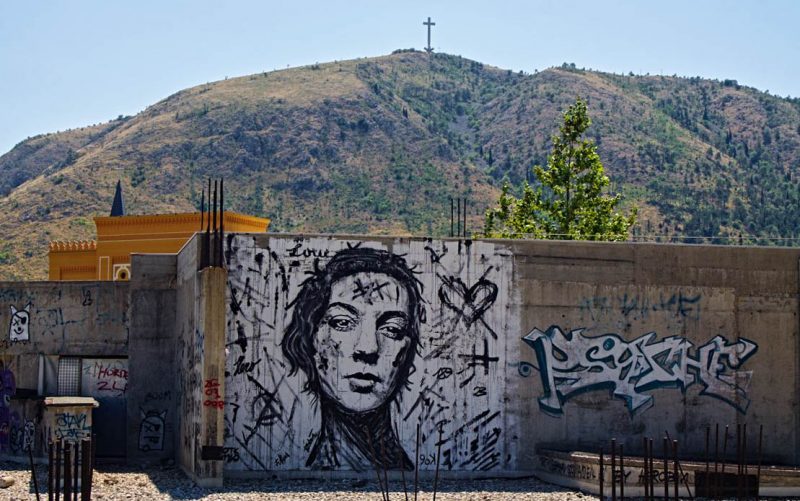 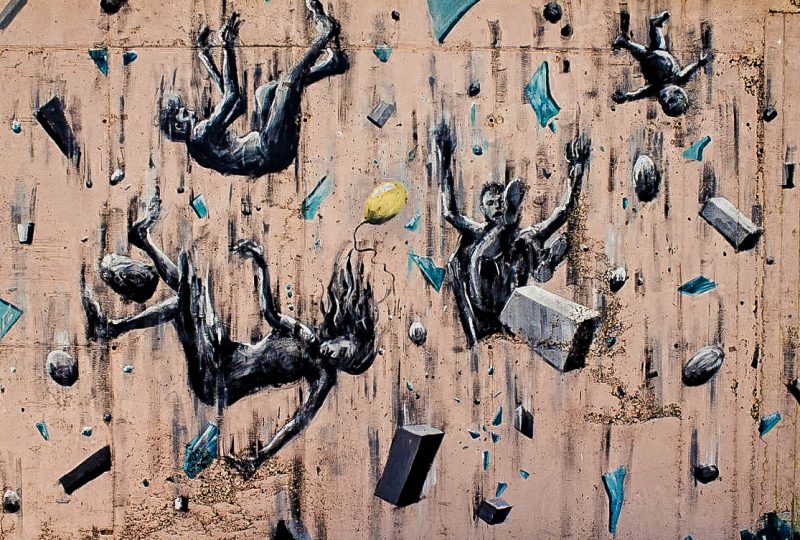 A bunch of people including a child are captured what looks like an explosion or falling from a height towards the ground. A shocking expression lies on their faces. At the same time pieces of broken glass, grenades and bricks are hanging in the air. A yellow balloon flies right through the brutal scene. It could belong to the child.

The artist intended to create a war monument dedicated to the victims of war. 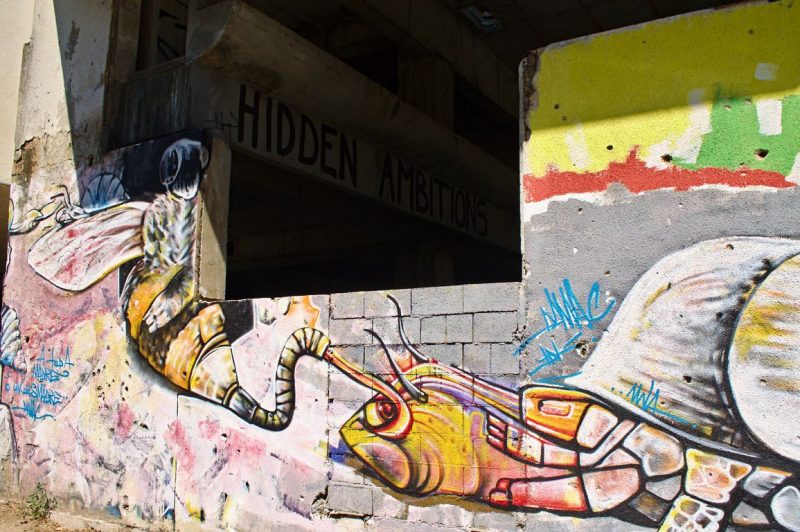 If you want to discover one amazing artwork after the other, make sure to walk down Alekse Šantić street, then turn into Tvrtka Miloša street. Large-scale murals of humans decorate the walls of an entire residency. 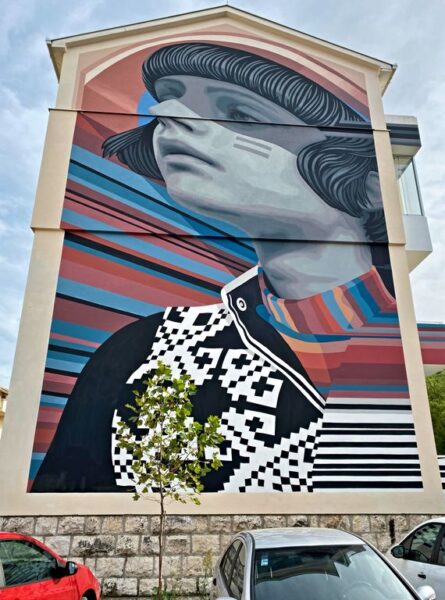 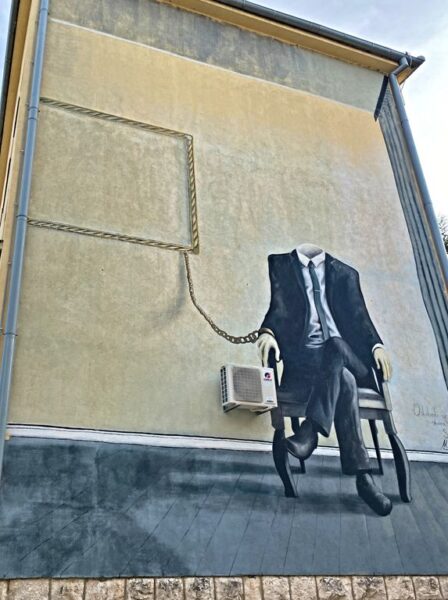 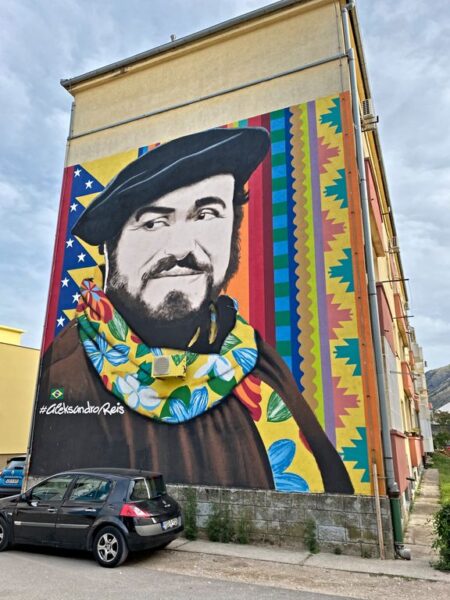 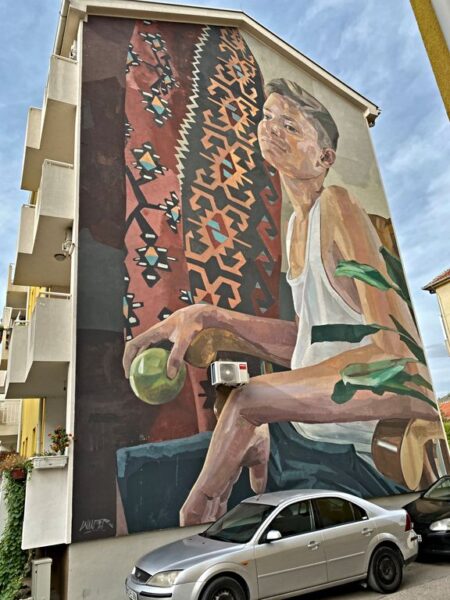 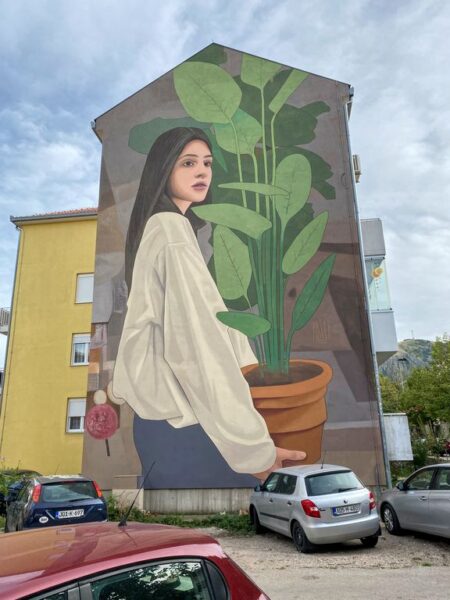 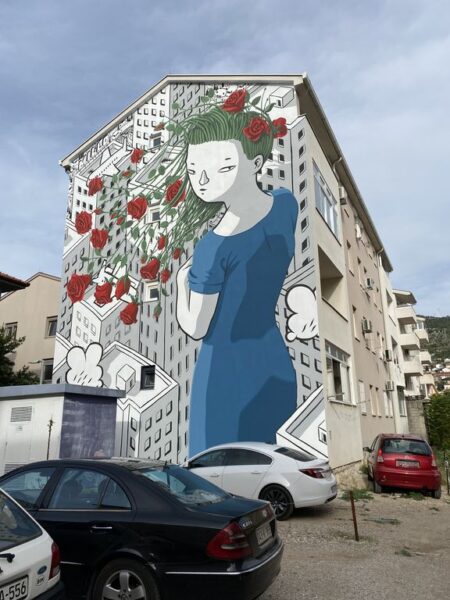 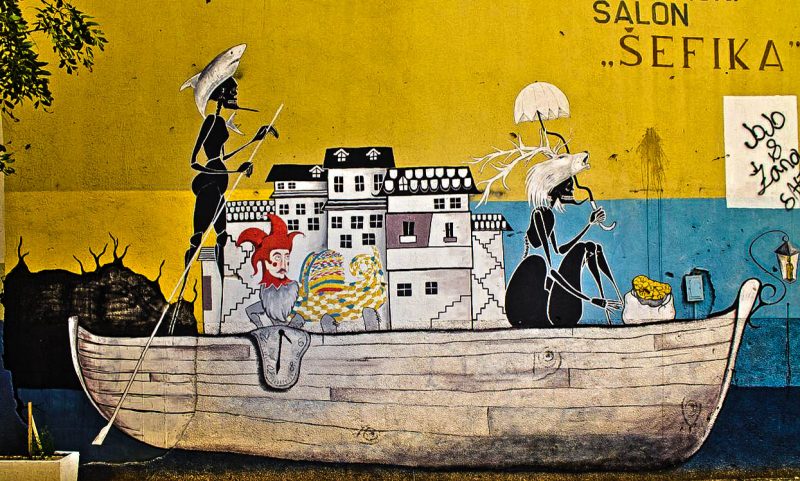 Memento mori – Remember that you will die and cannot bring your wealth with you.

The court jester which is also on board is making a fool of the skeleton couple because they want to bring all their belongings like a sack of gold and even their homes across the ocean of life. This ship will surely sink. A life lived is all they will be left with.

This mural expresses the division of Mostar with a mushroom whose head is formed like a bridge dividing the East and West side of the city. It represents the conflicts this city has to face from the beginnings of war until present. 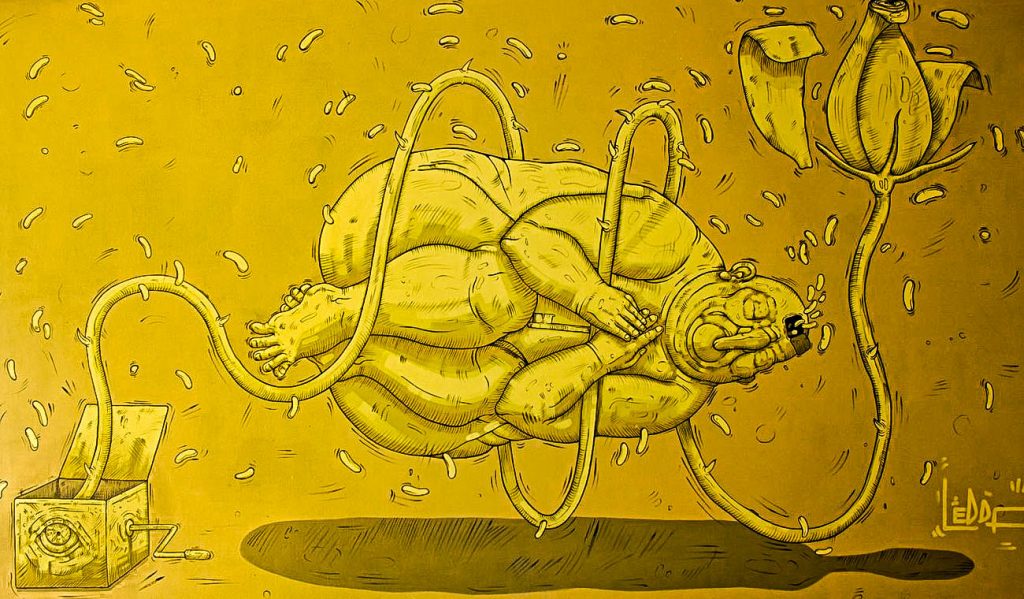 This artwork gives the popular children toy: jack-in-the-box a new twist.
What pops out of the box here, is a fat naked man floating in the embryonic position. He is entangled within the stem of a flower. The stem is the compression spring that makes the human pop out of the dark box into life.

One leaf of the flower is peeling off. The flower symbolizes life. Each stage of life is like petals of a flower. We learn, we make experiences, we blossom. However, looking up the artist’s real intention it is not the good type of blossoming. In fact we are exploiting the environment and consuming its resources in an unethical manner.

Our birth is like jumping out of a jack-in-the-box into a consumerist society (the puppet could be interpreted as us humans just being alive for each other’s entertainment.) 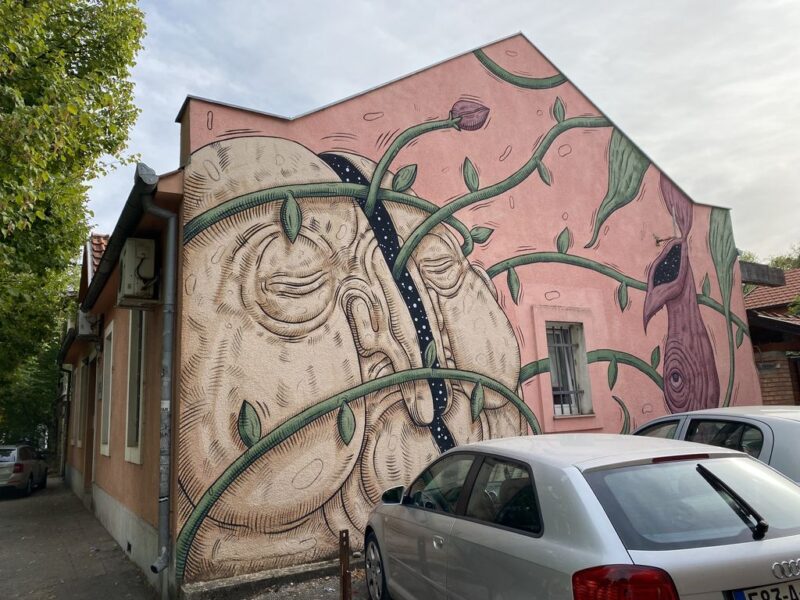 Another artwork of Luca Ledda is located on Alekse Šantić street. Again the same iconic figure of a fat pig-like human who is tangled up with stems of plants. A crack through which the universe shines through cuts its face into two halves. The eyes are closed ignoring the destruction of oneself and the environment around.

Around the train station 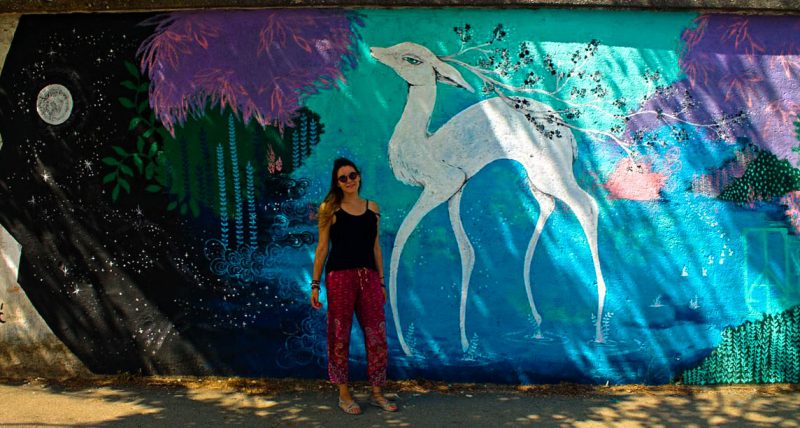 There is an open-air street art gallery next to Mostar’s train station. 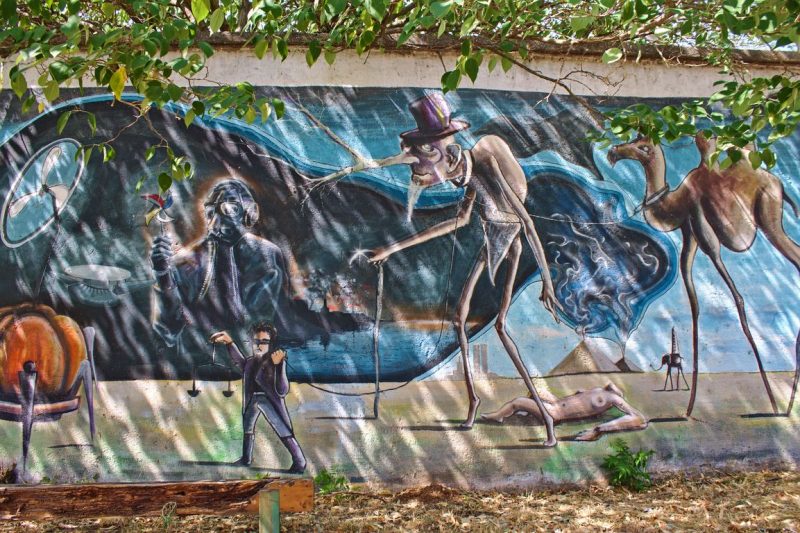 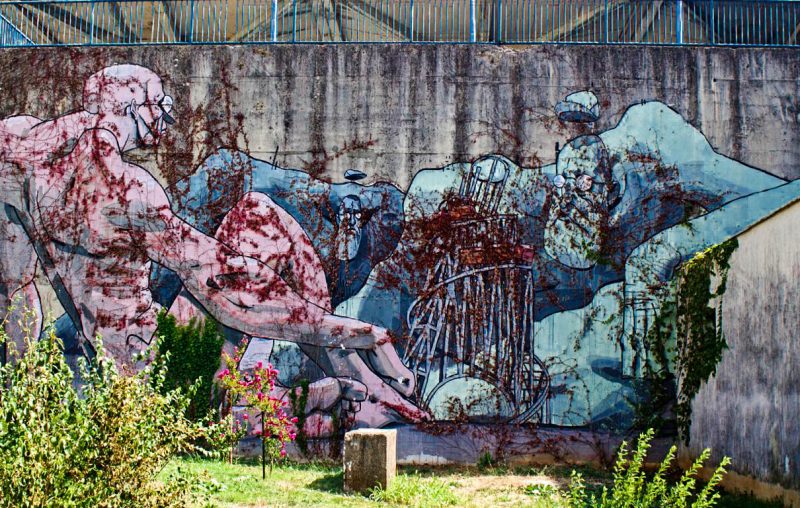