Mannheim is a city located in the South-West of Germany. The bigger cities nearby are Frankfurt and Stuttgart. Apart from the unique chess-board like structure of the city center, it’s an industrial city not really worth visiting.
Why I still chose to write about this city?

For two reasons:
The first reason is simple and out of the question:

It’s my home so I thought: why not write about a place not many would consider as a tourist hotspot if you have Berlin or Hamburg, the overall hyped travel destinations in Germany?

The other reason is that I would like to point out some insider facts about the city, turning Mannheim into a German off the beaten track destination.

Although Mannheim is internationally not well-known – and neither in Germany it is – there are quite some traits, making this place at least likeable. The city of squares is undergoing an overhaul in many parts of social and cultural life, attracting people from the neighboring cities, who are looking for a local job and area to live.

Regarding the city’s increasing approach towards international tourism, there are still a lot of obstacles to face. However, in the course of the last years the image of the city has already changed from an industrial desolate area to a place providing a high quality of living, working and enjoying different aspects of cultural life. 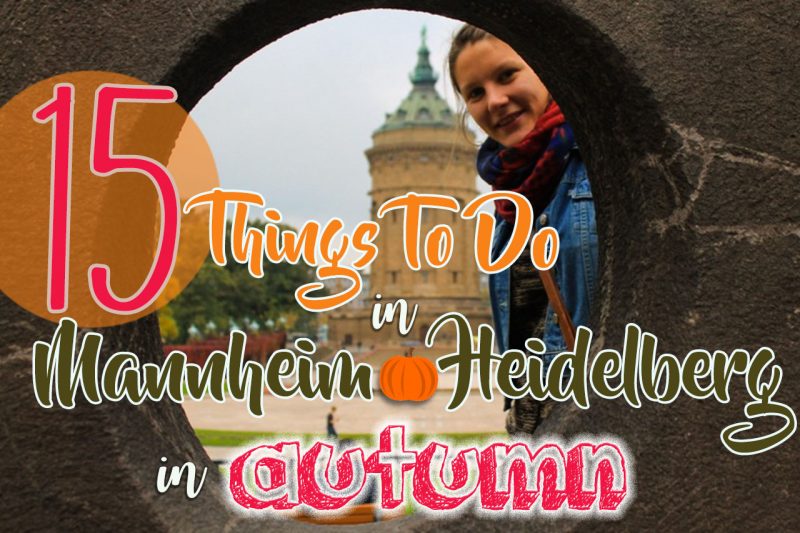 8 exclusive tips what to do in Mannheim in autumn 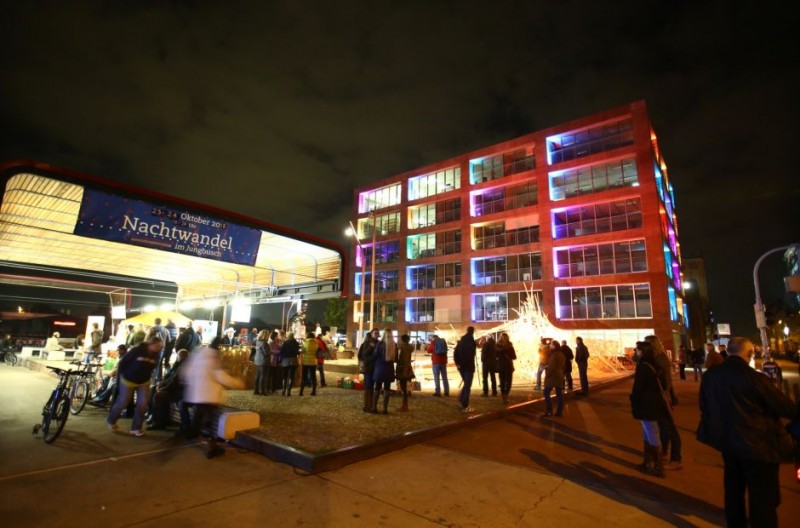 If you’re in Mannheim some time in October, don’t miss out on one of the city’s most alternative events. Nachtwandel is a night walk through a district that is considered as one of the city’s social hot spots. If it’s not the fruity cocktails served in the cozy bars, the scent of chocolate from the chocolate factory nearby will surely lure you into Jungsbusch’s streets.

Apart from the social problems Jungbusch has to tackle, the area along the harbor is becoming more and more popular among students, artists and young citizens. This creative and fresh face of the city can be best experienced at the Nachtwandel, when the spotlight is put on the many uprising bars, galleries, food stands and interactive corners of a district in permanent flux. 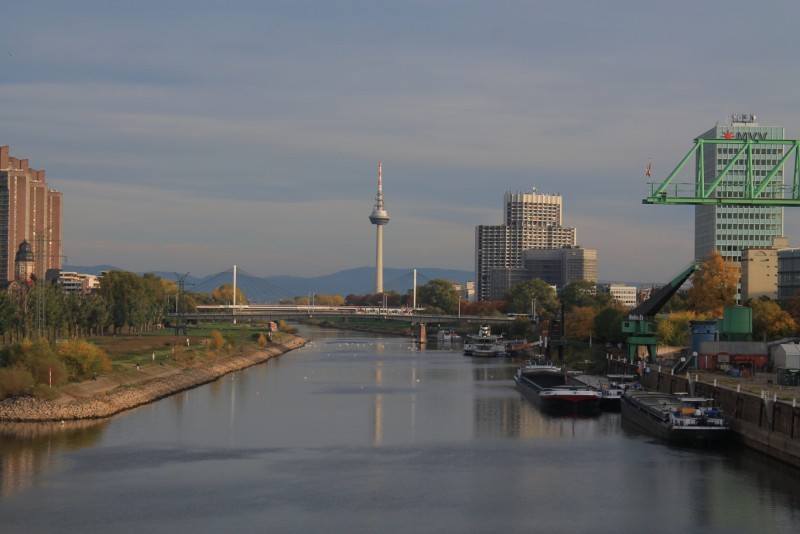 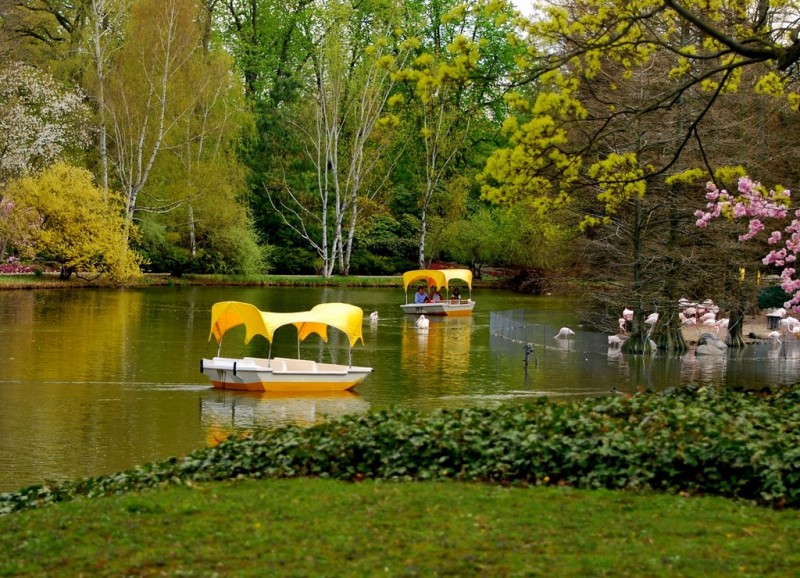 The Fernmeldeturm is one of the best visible landmarks of the city located around the Luisenpark, the city’s most popular recreational park. The top of the building accommodates a rotating restaurant. If the weather is good, make a trip to Luisenpark. There are plenty of activities to do like taking a gondola ride, enjoying a tea at the Chinese tea house or being amazed by the various animals.

If you don’t want to pay entrance, go for a walk in Oberer Luisenpark. This is the free park area.

3. Take a stroll along the Neckar riverside 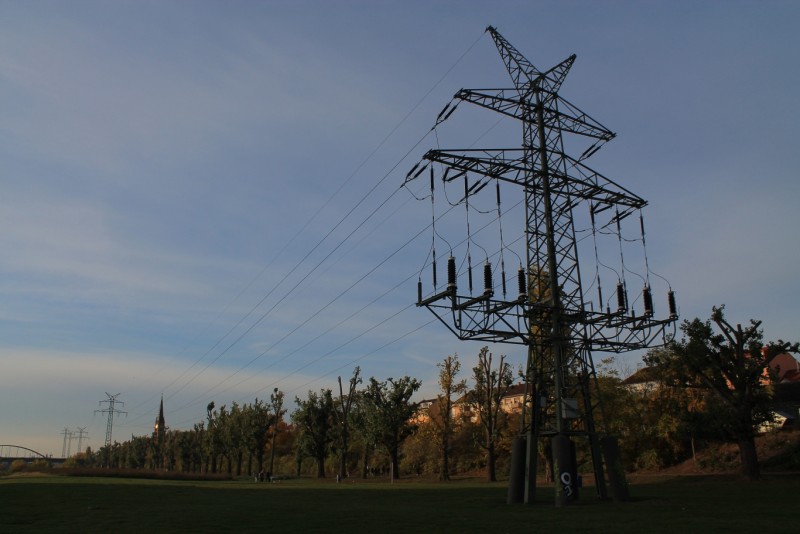 The Neckar is one of the two rivers that flow through the city. Especially in summer the broad riverside is crowded by people who have a barbecue or a drink. There is a city beach with sand and live music opened only in summer. To cross the sides, take one of the bridges.

4. Walk around the Wasserturm 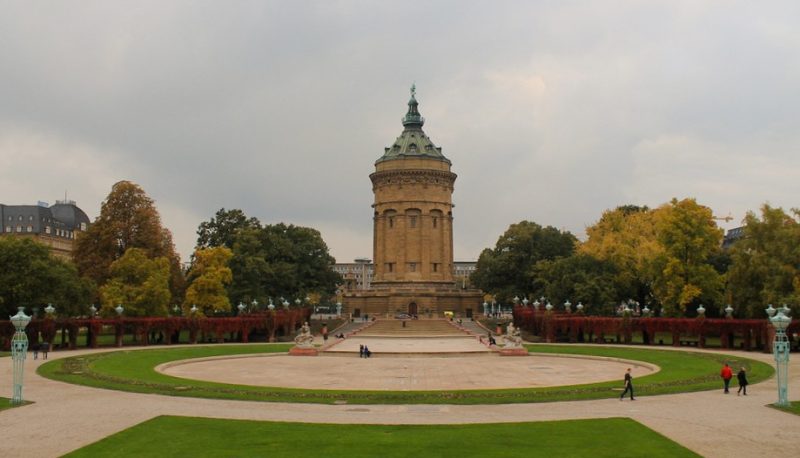 The round tower with the green roof is the main landmark of the city. It’s located within the city center at the end of the popular shopping street called Planken. The tower is surrounded by a nice garden with trees and flowers. In spring and summer this place is visited by many inhabitants, sitting on the benches or cooling their feet in the fountain basins.

For more information about the city Mannheim check out their local website.

5. Plan a trip to Ladenburg 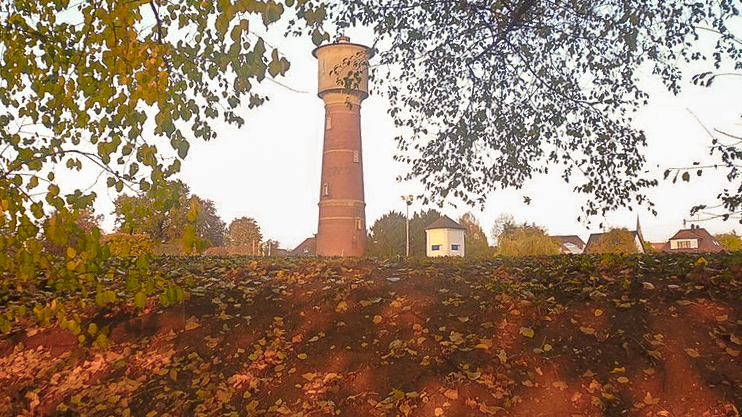 Ladenburg is the most beautiful suburb of the vicinity. It is located between Mannheim and Heidelberg along the river Neckar. You can reach it best by bike or bus 628 stationed at Seckenheim Rathaus.

Walk through the old town or rest at the Neckarwiese, a big natural park along the river with a little beach and enough green spaces to walk your dog or play outdoor games. If you’re there in summer, don’t miss the beach party with the famous dragon boat race.

6. Drink a Glühwein at the Christmas market in early winter 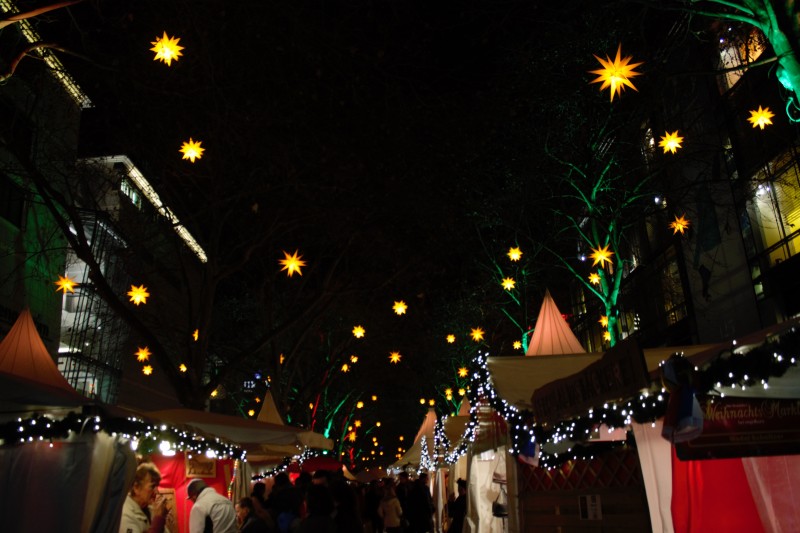 German weather is not the best, especially winters can be uncomfortable. People rather stay inside their cozy homes than go outside. This is the reality of German winters, with one exception: Christmas markets already starting in the end of November bring a winter wonderland feeling to people with winter depression, turning their grumpy winter faces into happy smiles.

The Mannheimer Christmas market offers not only candy and hot drinks for the soul. There are also various stalls for tinkerers and fans of creative gifts. If you need a unique Christmas present, the Christmas market is a real gem: self-made candles, jewelry, knitted socks and much more can be bought there.

Both markets are opened from November 25th to December 23rd.

7. Rummage through one of the many flea markets 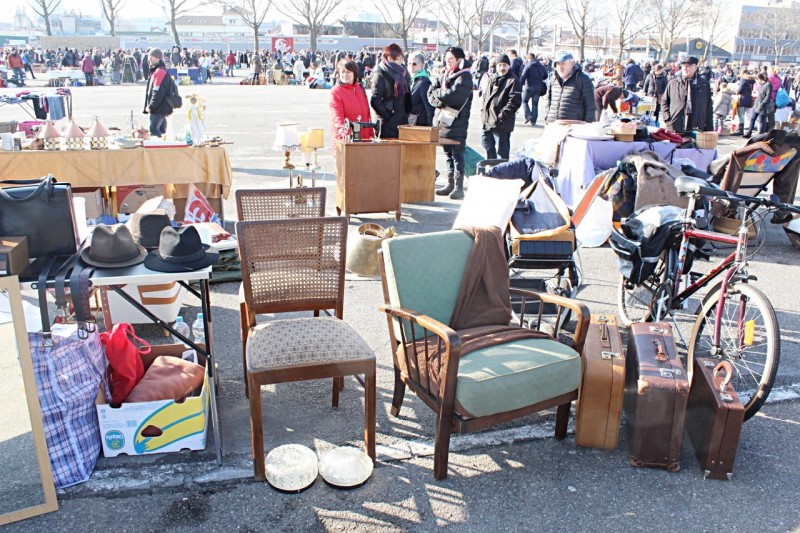 Every Saturday from 8 AM until 6 PM the traditional Trödelmarkt takes place on a big parking square. The monthly flea market is called Krempelmarkt. The word Krempel is only used in special regions and can be translated as “stuff that stands in the way and is not worth much”.

Apart from this weekly flea market, there are special flea markets that attract mainly young people. Night flea markets are the city’s all the rage. Nachtkonsum, though not more than a flea market taking place far beyond the late hour, is a very popular event among people who like to combine underground shopping with a going-out-atmosphere.

Apart from the stalls selling clothes, books, and vintage stuff, you can buy beer and hip drinks like Club Mate or Fritz Cola. For Heidelberg lovers, the same urban late-night shopping version is called Nachtflohmarkt, taking place in a former factory hall.

8. Explore the upcoming bars of the Jungbusch Kiez 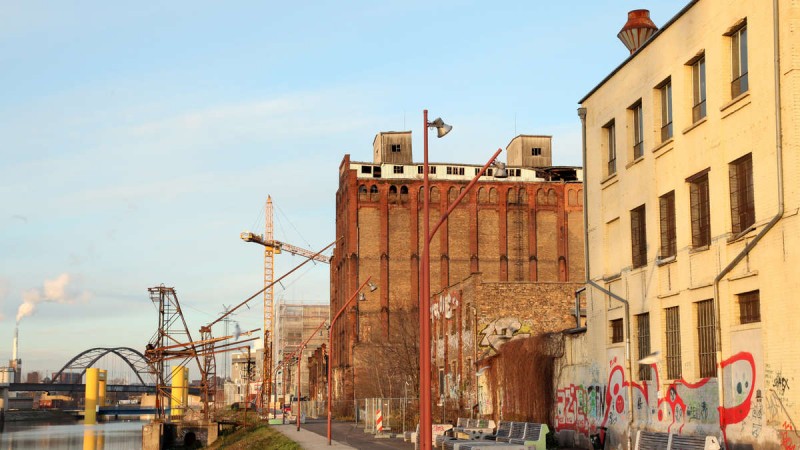 Mannheim is catching up with the bar scene and night life of Berlin and Hamburg. As mentioned previously, the district Jungbusch is undergoing a revitalization. In some German regions the word Kiez represents the German lifestyle in a special district far better than just calling it “neighborhood”. Especially in Berlin “Kiez” is understood by almost everyone. Every neighborhood has its own character – some more, some less. Taking Jungbusch, the character of this Kiez is a mix of multicultural atmosphere and increasing gentrification.

If you don’t have any plan where to go for a drink, take a walk through Jungbuschstraße: bars playing experimental electro vibes are preparing you for the late night thrill. Try out Hagestolz, Onkel Otto Bar, Café Blau, Kiets König and Café Nelson.

7 exclusive tips what to do in Heidelberg in autumn

Heidelberg is the neighbor city of Mannheim and considered the more beautiful city among tourists. Whereas Mannheim has a rough face, Heidelberg captivates visitors with romantic alleys and historical sights. The charming Old Town stands in contrast to Mannheim’s grid map.

Both cities are home to international students – Mannheim is well-known for business studies and Heidelberg has a worldwide excellent reputation for medical studies. If you want to visit both cities, take the tram 5 , connecting the Rhine-Neckar-valley. 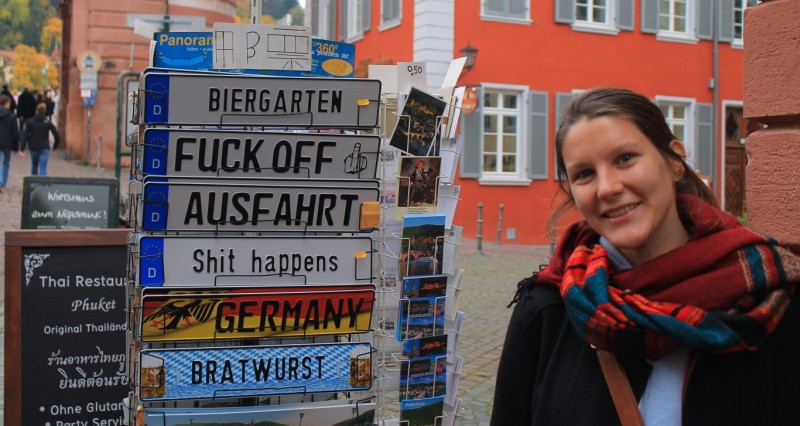 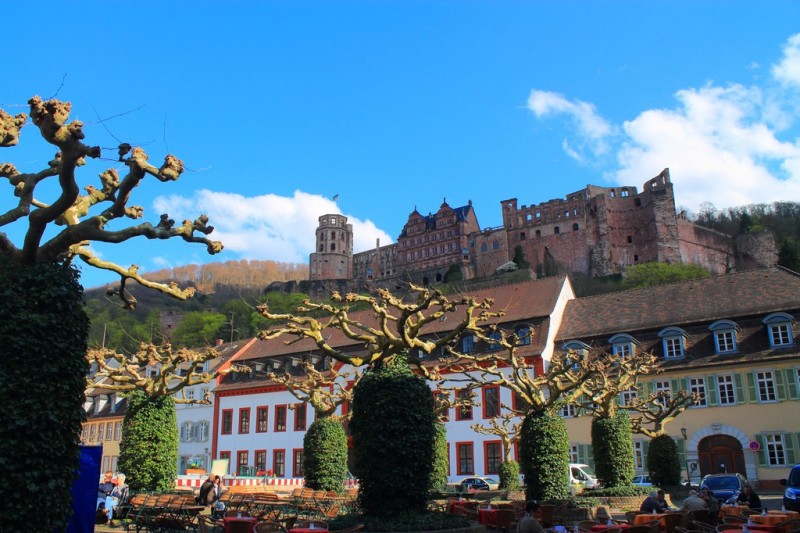 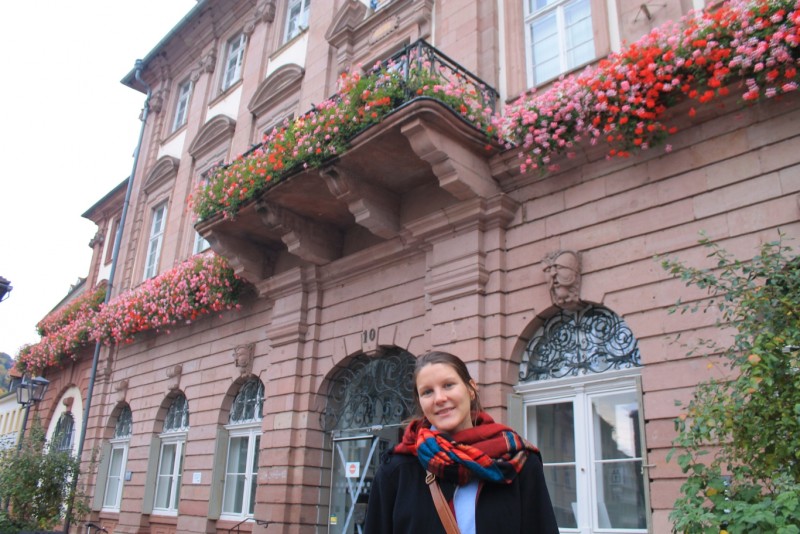 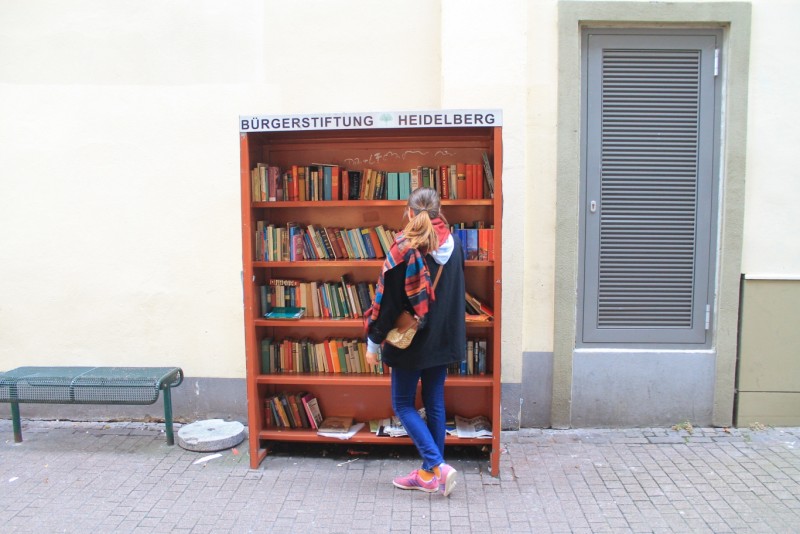 If you’re interested in books, have a look at Antiquariat. The book shop spreads over three floors with high book shelves where you can find books in all languages and in all genres. There is also a public book exchange where you can borrow books or bring your own books for exchange. Above the hills you can catch a glimpse of the old castle.

For more information about the city Heidelberg check out their local website.

2. Climb up the castle 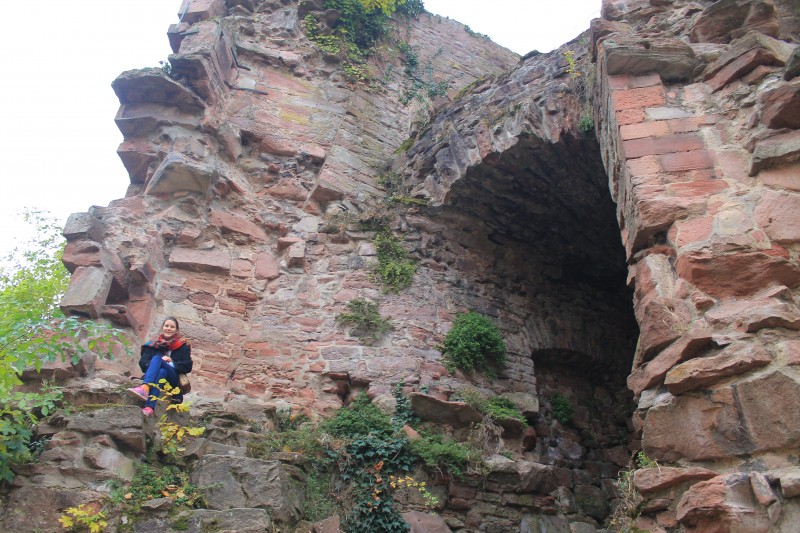 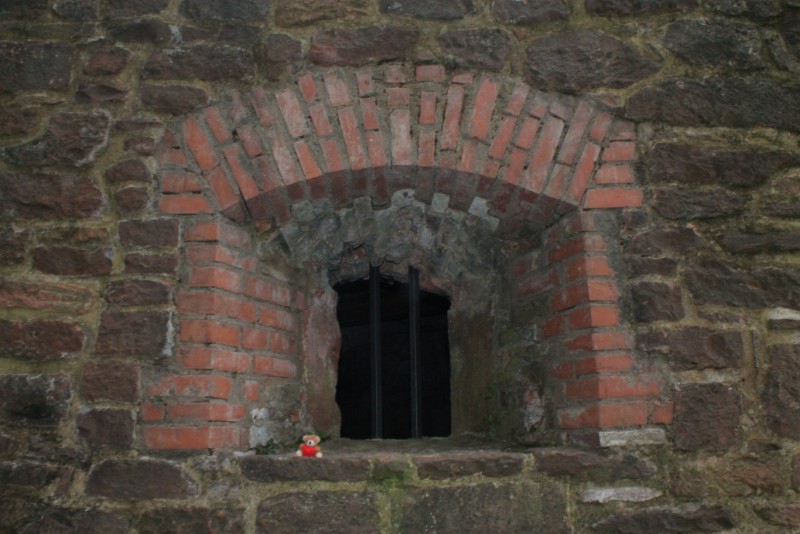 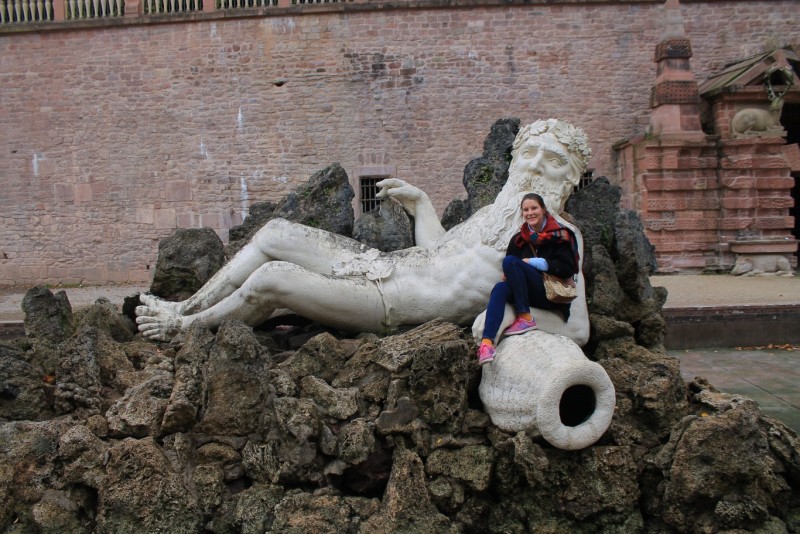 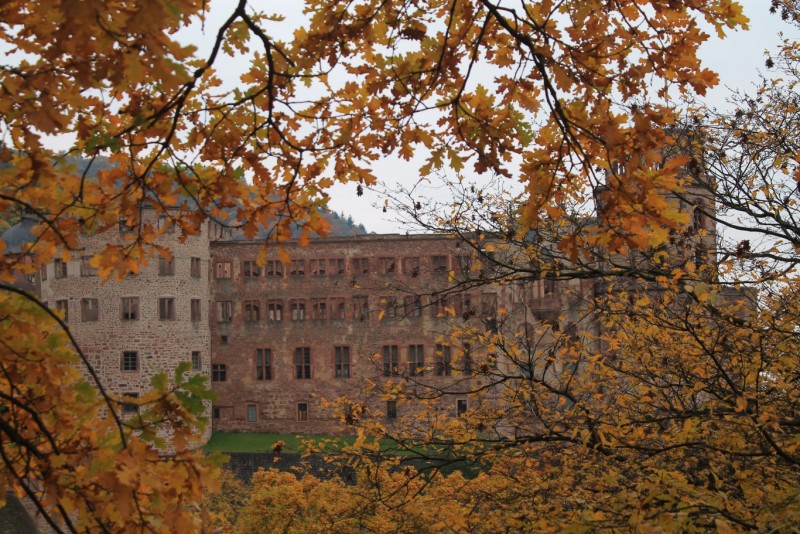 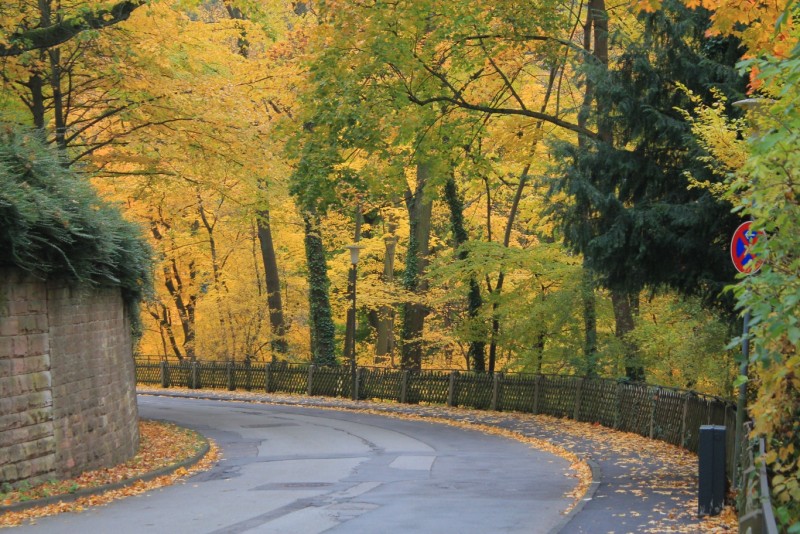 There is no chance to visit Heidelberg and not see the castle. You can walk up by taking one of the trails. It’s not necessary to buy a visitor’s ticket as the castle garden is accessible for free. You can walk around the ruins and get an impression of how it once looked. The castle is situated within the Königstuhl, the highest mountain of the region.

3. Have a drink in Untere Straße and cross the Old Bridge 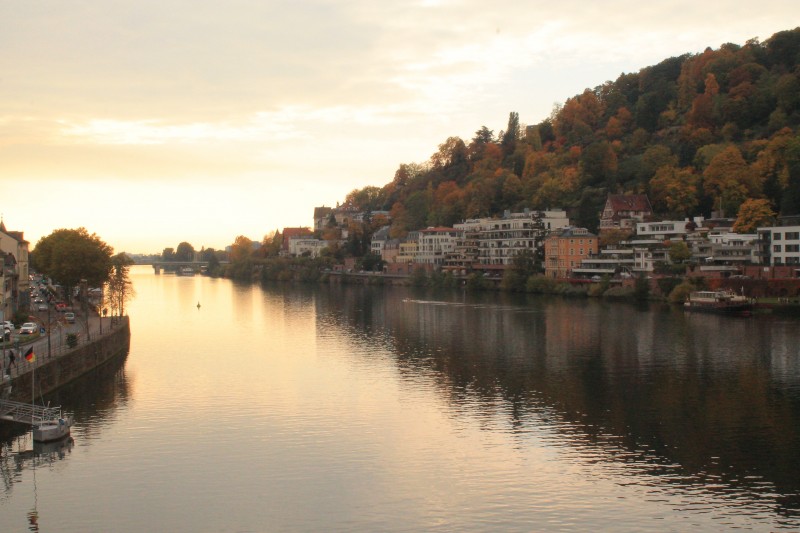 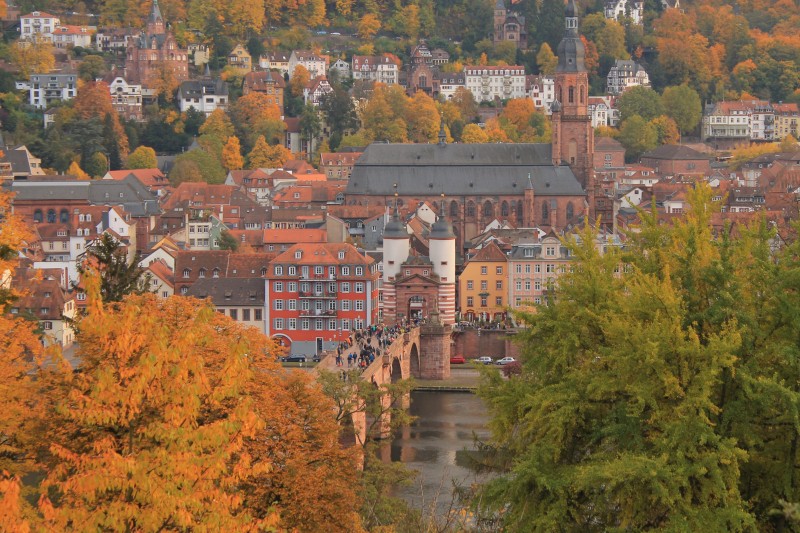 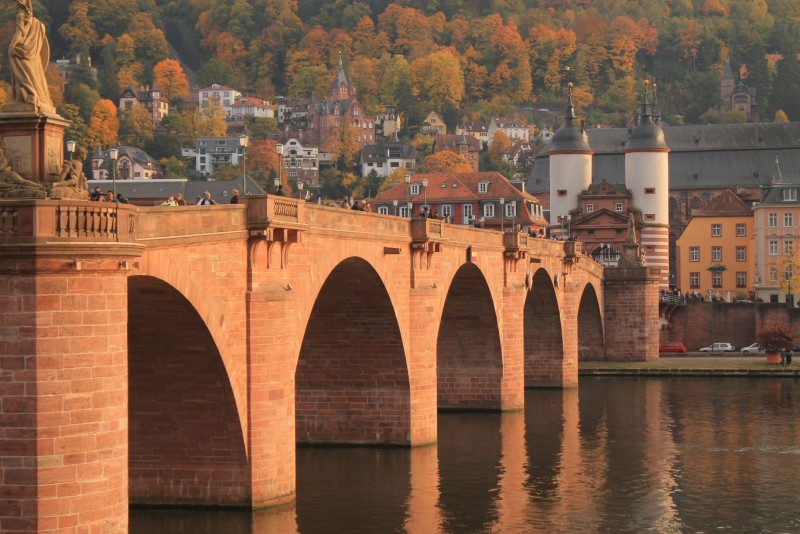 From the old Karl-Theodor-Bridge (Alte Brücke) you can catch a good view over the river. The gate is well preserved and is enclosed by two towers. In the middle ages it was used as a dungeon for prisoners.

Untere Straße is a street with many bars and some clubs alongside. Students and visitors come here at the weekends to grab a drink. In summer, it’s a popular location to go out with friends and meet new people. It is within walking distance of the Old Bridge.

Popular bars are Destille, Mohr or Reichsapfel&Lager.
For those who want to continue the night in a club, check out tangente, Frauenbad or halle02.

4. Greet the Bridge Monkey and touch its mirror 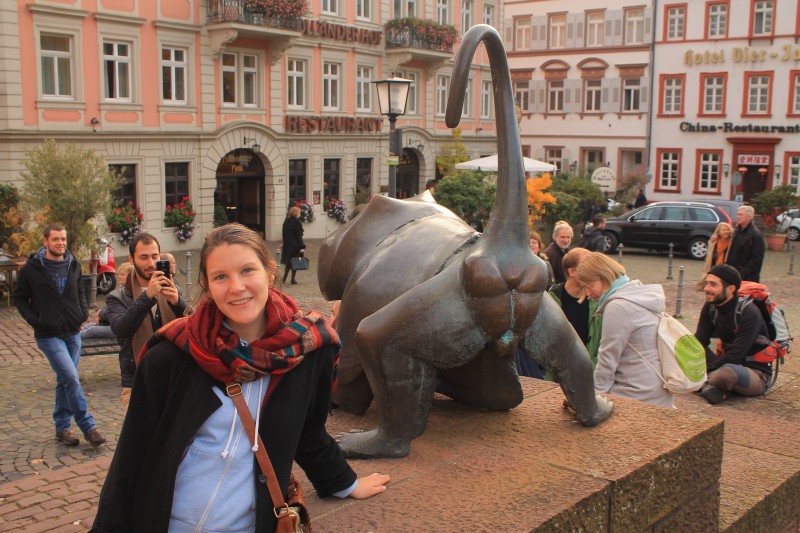 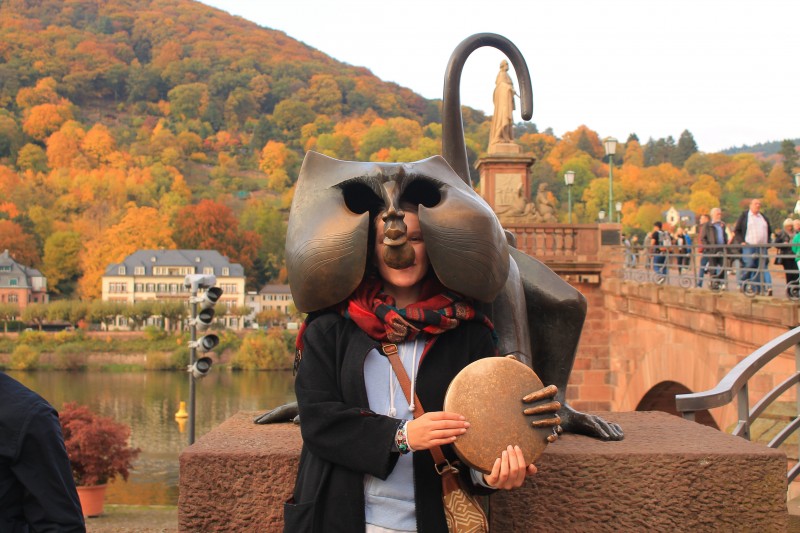 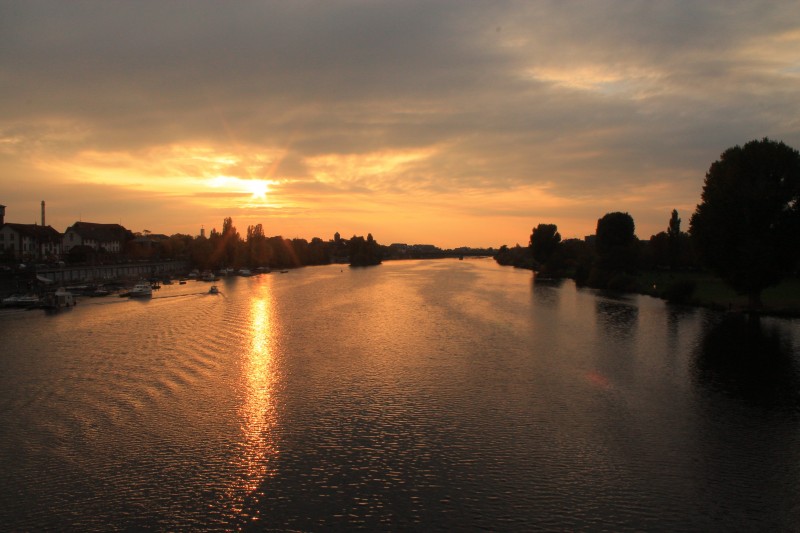 A statue of a monkey stands next to the old bridge. It’s the old monkey of Heidelberg, mocking the visitors with its mirror and showing them that they’re not better than anyone else. While we were there, tourists were lining up to stick their heads through the opening for a picture.

The mirror is a symbol of wealth. For more luck in their lives, visitors stick their heads through the opening in the mask and touch the mirror. Another legend says that touching the mirror means that you’ll return to Heidelberg. The funny aspect is that nobody seemed to realize that the backside of the monkey statue is also a good photo opportunity. 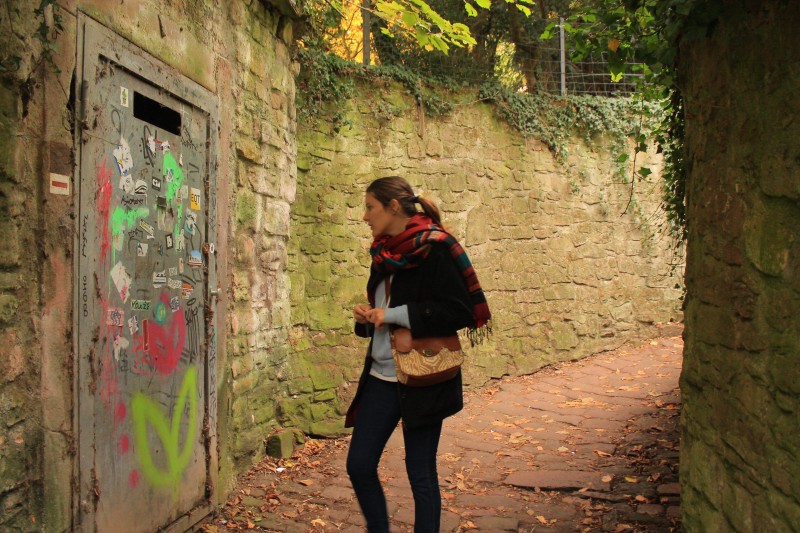 Another option to spend your day is to hike the Philosopher’s Walk. Cross the old bridge and follow a narrow cobblestone path leading up the mountain. The path is quite steep. Philosophers walked here to get inspired and to reflect about society. The name of the hill is Heiligenberg.

On top you’ll find yourself in an amphitheater, dating back to the Nazi regime. It was built to gather people in order to feed them with propaganda. Today it’s an event location to celebrate the Walpurgis Night on 30, April. In this night plenty of people walk to Thingstätte dressed as witches to dance around a huge bonfire. 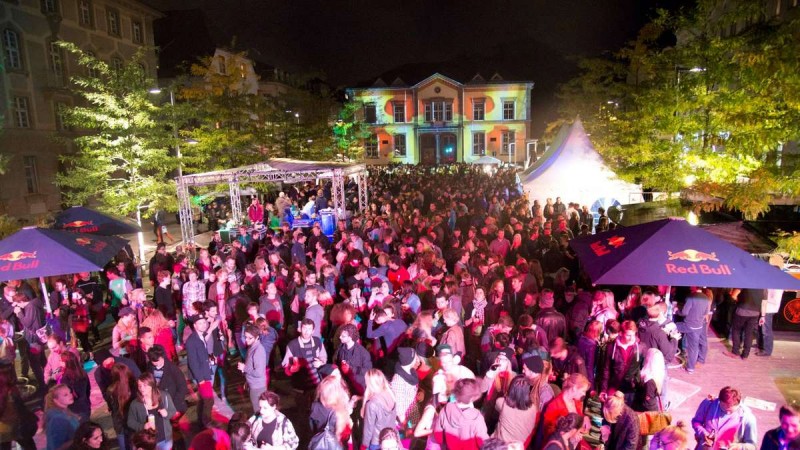 If you’re lucky enough to be in Heidelberg on the last Saturday of September, the whole city is getting prepared for the Heidelberger Herbst, the traditional autumn fair.

The streets of the Old Town are fully crowded by locals and visitors, drinking young wine, the first wine of the new grape harvest and rummaging through the different stalls. The open-air party lasts far beyond the late hours, playing live music and cheering up the evening.

7. Get enchanted by the annual Castle Illumination and fireworks 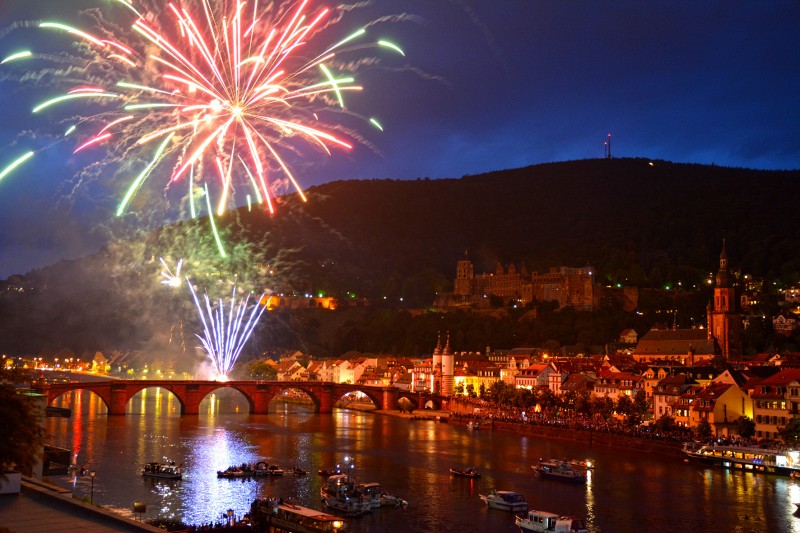 In June, July and September, Heidelberg celebrates the history of its castle with a fascinating spectacle, called Castle Illumination. The light show consists of a whole performance, highlighting the ruins with sparkling colors and effects.

The illumination tells the story of the beginnings and destruction of the castle by underlining it with a variety of visual effects.

The ceremony ends with thrilling fireworks of perfect illumination.